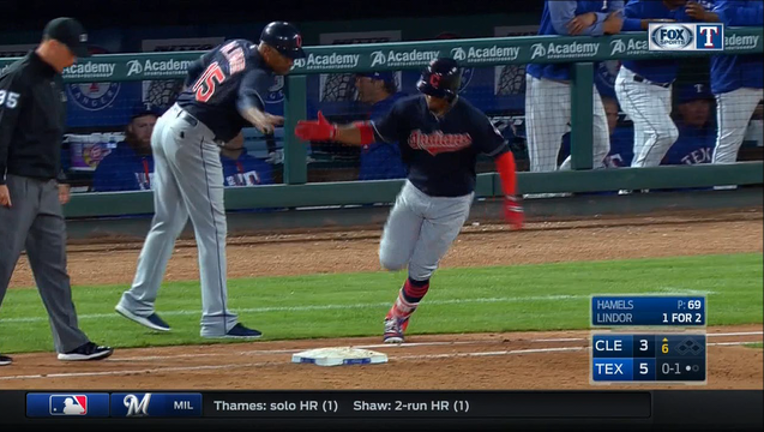 And that list of milestones was a lot more fun to talk about than his botched defensive play that jeopardized the Indians' bid at a season-opening sweep.

Lindor atoned for his puzzling miscue with his first career slam and first multi-homer game - along with a career-high five RBIs - and the defending AL champions rallied for a 9-6 win over the Rangers on Wednesday night.

The Rangers went ahead 4-3 in the fifth when Lindor misjudged Joey Gallo's speed, couldn't beat the slugger to second base on an attempted two-out force play and allowed two runs to score on an error when his throw to try to salvage an out surprised Edwin Encarnacion and skipped off the first baseman's glove.

"I was saying, 'Please, Lord, let us tie this game,'" Lindor said of his reaction after the botched play. "I don't want (Danny) Salazar to lose the game and have to talk to you guys about my error. Let us tie the game, and let's see what happens after that."

Dyson (0-2) loaded the bases and walked in a run before Lindor's homer down the right field line during a five-run Cleveland ninth.

Dyson blew his first save after giving up three runs in a tie game in an 8-5 loss on opening day. The hard-throwing right-hander has allowed eight runs in one inning for the defending AL West champs after throwing six scoreless innings to help the U.S. win the World Baseball Classic.

"This is a guy that ... was really sharp at the WBC," manager Jeff Banister said. "Doesn't seem to be that sharp right now. Sam's got to find a way to figure it out. This is a guy that's been really good for us. Not going to jump off after two games."

The switch-hitting Lindor homered from both sides, pulling a pitch from Cole Hamels into the seats in left field in the sixth - shortly after his miscue - to get Cleveland within 5-4. The decisive shot off Dyson landed about 10 rows deep.

Shawn Armstrong (1-0) struck out the only hitter he faced, Jonathan Lucroy, for his first major league win. Bryan Shaw pitched a perfect ninth for his first save.

Nomar Mazara homered, had three hits and drove in three runs for Texas. Elvis Andrus connected on a solo homer in the seventh.

Jose Ramirez hit a tying two-run single for Cleveland in the fourth after Hamels opened with three perfect innings.

Salazar, who led the majors with 37 strikeouts in the spring, struck out nine in 5 2/3 innings, although he walked four and gave up five runs, four earned. The right-hander fanned the side in the first while allowing Mazara's two-run homer, a 439-foot shot into the second deck in right.

Lindor's slam was the first with Cleveland trailing in the ninth or later since Nick Swisher off Ernesto Frieri of the Los Angeles Angels on June 19, 2014. The Indians' last grand slam was by Carlos Santana against the Chicago White Sox on Sept. 18, 2015. ... Texas' Drew Robinson grounded out as a pinch-hitter in his major league debut in the seventh.

Indians: LF Michael Brantley didn't start after being in the lineup the first two games in his return from a right shoulder injury that mostly sidelined him for 17 months. Manager Terry Francona said he was available, and Brantley struck out as a pinch-hitter in the eighth. "I don't think any of us want to lose sight of the fact that he's had a long haul back," Francona said.

Rangers: RHP Andrew Cashner (right biceps soreness) threw 72 pitches over four innings in a simulated game and said he's ready for a big league start April 15 after one rehab appearance in the minors. However, pitching coach Doug Brocail said the club was likely to prefer two rehab starts. ... Adrian Beltre (right calf tightness) was one of the opposing hitters.

Rangers: RHP A.J. Griffin (7-4, 5.07 in 2016) starts Friday at home against Oakland after earning a spot in the Texas rotation for the second straight spring.