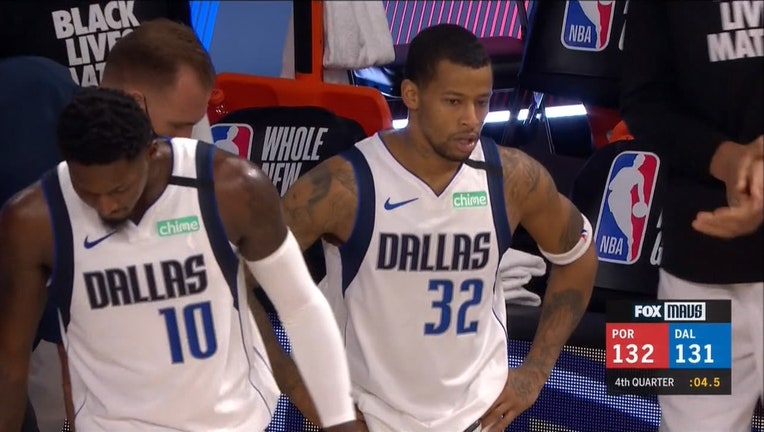 LAKE BUENA VISTA, Fla. - Damian Lillard tied his career high with 61 points, and the Portland Trail Blazers beat the Dallas Mavericks 134-131 on Tuesday night to move into eighth place in the Western Conference.

The Blazers will clinch a spot in the play-in series for the last playoff spot out West with a win Thursday against Brooklyn.

Lillard made nine 3-pointers in his sixth 50-point game of the season. He’s the 12th player in NBA history to score 50 points in back-to-back games after dropping 51 on the 76ers on Sunday.

Carmelo Anthony added 26 points on 10-of 17 shooting for Portland.

Kristaps Porzingis scored 36 points and Luka Doncic had 25 points, 10 assists and eight rebounds for the Mavericks, who will finish No. 7 in the West.

Keldon Johnson had 24 points and 11 rebounds, and the Spurs kept alive their chance of becoming the first team in NBA history to make 23 consecutive playoff appearances.

DeMar DeRozan scored 23 points for San Antonio, which has won five of seven since arriving in the Florida bubble.

The Western Conference is guaranteed to have a play-in for its final playoff spot. The Spurs will need help to be one of the teams playing this weekend for the final spot, but made sure they couldn’t be eliminated Tuesday with their win.

Russell Westbrook had 20 points and seven turnovers in his first game back in the lineup for Houston after missing two games with a bruised right quadriceps.

Devin Booker scored 35 points and the Suns protected their playoff hopes by beating the 76ers to remain undefeated in the NBA restart.

Mikal Bridges added 24 points for the Suns, who are in the mix for the final spot in the Western Conference playoff race.

Phoenix is 7-0 as the only undefeated team in the restart.

Alec Burks led the 76ers with 23 points. Philadelphia, No. 6 in the East and already assured of a playoff spot, is attempting to prepare for the postseason after losing Ben Simmons to a knee injury.

Jayson Tatum scored 29 points, and the Celtics put the Grizzlies in further danger of missing the playoffs.

The Grizzlies missed another chance to guarantee themselves a spot in the West play-in series. They dropped to ninth in the conference with Portland's victory over Dallas.

Boston (48-23), which has already locked up the Eastern Conference’s third seed, won its fourth straight.

Memphis (33-39) lost for the sixth time in seven games since the restart. Ja Morant finished with 26 points and 13 assists.

Jeremiah Martin and Timothe Luwawu-Cabarrot each scored 24 points, leading Brooklyn to the victory.

Dzanan Musa added 17 points and Tyler Johnson had 14 for the Nets, who improved to 5-2 in the restart with their third straight victory.

With the Nets locked into the No. 7 seed in the Eastern Conference and the Magic eighth, the teams went with limited rosters while getting players extra rest. Brooklyn suited up nine players and Orlando used 10.

Markelle Fultz and Wes Iwundu each scored 18 points for the Magic, who have dropped five in a row after a 2-0 start at Walt Disney World.