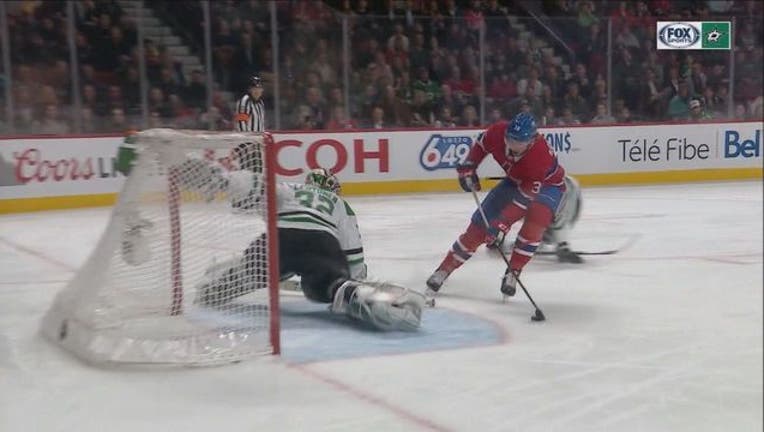 MONTREAL (AP) - Artturi Lehkonen scored twice and the Montreal Canadiens snapped their five-game losing streak with a 4-2 victory over the Dallas Stars on Tuesday night.

Antti Niemi made 36 saves for his fifth win of the season. Niemi hasn't lost in regulation since Feb. 14, going 3-0-3 during that stretch.

The Canadiens were at home for the first time since a 1-3-2 road trip.

Andrew Shaw left midway through the third period with an injury. Shaw hit former teammate Greg Pateryn along the boards but got the worst of it as their heads collided. The Canadiens winger has already missed 19 games this season with a lower-body injury.

The game marked Alexander Radulov's return to the Bell Centre. Radulov hadn't faced his former club in Montreal since signing with Dallas as a free agent in the offseason.

Radulov was met with cheers when he was featured on the big screen in the first period. The winger scored 18 goals in 76 games for Montreal last season - his first back in the NHL since 2011.

Faksa got Dallas on the board at 11:48 of the first period as he deflected Pateryn's shot past Niemi.

Lehkonen tied things up with a wrist shot to the blocker side at 16:31.

A four-minute high-sticking penalty to Dan Hamhuis in the second changed the course of the game, with Montreal scoring twice in 35 seconds.

First, Lehkonen beat Lehtonen through the legs from the slot at 8:41. And after Faksa took a tripping penalty to give the Canadiens a two-man advantage, Gallagher netted his team-leading 26th of the season at 9:16.

Benn got one back for the Stars on the power play at 18:20 of the second. Radulov got an assist on the goal.

Montreal finished 3 for 5 with the extra skater.

During the game, the Canadiens announced defenseman Shea Weber had surgery Tuesday to repair a torn tendon in his left foot. The team expects his recovery to take six months.

Weber is thought to have been injured when he was hit by a shot in the first game of the season. The 32-year-old has not played since Dec. 16.

NOTES: The Stars are two games into a six-game road trip. ... Galchenyuk has eight points in his last eight games. . The Stars beat Montreal 3-1 earlier this season in Dallas.

Stars: At the Toronto Maple Leafs on Wednesday night.