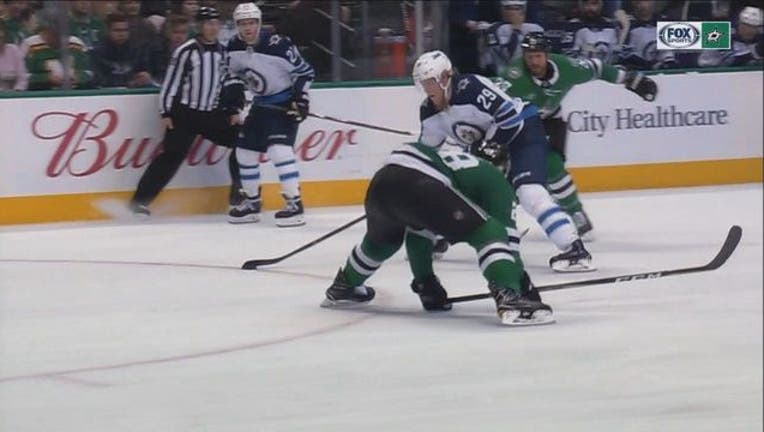 Michael Hutchinson, who has won both of his NHL starts this season, gave up Tyler Pitlick's goal just 10 seconds into the game but finished with 33 saves.

Winnipeg moved into a tie with Nashville atop the Central Division. The Jets have outscored opponents 29-12 in winning five of their last six.

Byfuglien assisted on the first three goals, by Nikolaj Ehlers, Toby Enstrom and Mark Scheifele. On the fourth, assists went to Ehlers and the goalkeeper. It was the first assist of Hutchinson's 101-game career.

Dallas' Kari Lehtonen made 17 saves on 21 shots. Ben Bishop replaced Lehtonen after the fourth goal with 8:01 left in the second and stopped five of six shots.

Tyler Seguin scored for the Stars late in the second. Alexander Radulov added a goal with 47 seconds to play. They each assisted on the other's goal.

The Stars' lead for the first wild card in the Western Conference dropped to one point over Calgary.

Ehlers finished with a goal and two assists, all in the second.

Dallas took a quick lead after Radek Faksa won a faceoff, and the puck went back to Pitlick in the left faceoff circle. He unloaded a snap shot past Hutchinson into the upper right corner of the net.

With the teams skating 4-on-4 early in the second, Byfuglien dropped a pass for Ehlers. He skated to the top of the slot and drove a slap shot just under the crossbar to tie the game.

The Jets took the lead at 6:33 of the second. Jack Roslovic passed to Enstrom, whose wrist shot from the inside edge of the right circle went under Lehtonen.

About a minute and a half later, Scheifele increased the margin to 3-1 with his power-play goal from the slot.

Second-year man Laine reached 30 goals for the second straight season with a snap shot from the right circle and added number 31 from the slot at with 1:13 left in the period.

NOTES: Six of Scheifele's 19 goals this season have come in three games against Dallas. ... Winnipeg has won the first three games of the season series by a combined score of 14-6. ... Pitlick's goal was his career-high 12th of the season. It was the earliest goal off a faceoff in Stars history. ... Hutchinson was playing his second NHL game in a season spent mostly with Manitoba of the AHL. ... Enstrom has 54 career goals, but had not scored in 87 games since his 53rd on Nov. 3, 2016. ... Dallas is 1 for 18 on the power play in its last eight games. ... Winnipeg D Tyler Myers skated gingerly off the ice late in the third period after blocking a shot.

Stars: Play the second in a five-game homestand on Tuesday vs. Calgary.