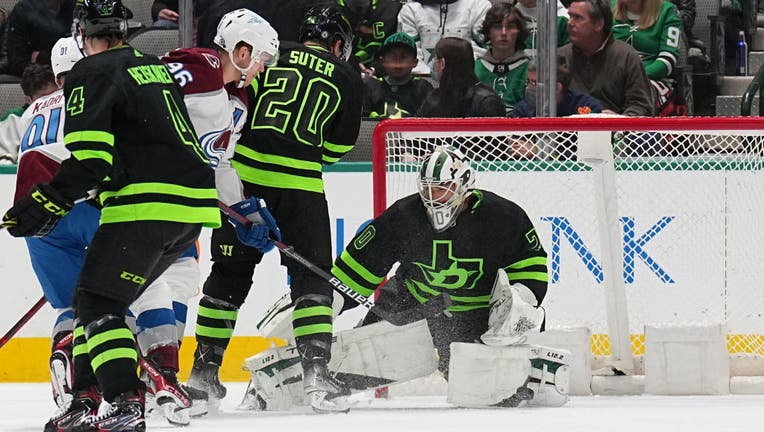 DALLAS, TX - FEBRUARY 13: Braden Holtby #70 of the Dallas Stars makes a save against the Colorado Avalanche at the American Airlines Center on February 13, 2022 in Dallas, Texas. (Photo by Glenn James/NHLI via Getty Images)

The Avalanche increased their franchise-record point streak to 19 games (17-0-2) and their NHL-leading point total to 72 in 46 games, three points ahead of the Florida Panthers with a game in hand.

Landeskog and Nazem Kadri scored in the first period, with Cole Makar assisting both times.

Nicolas Aube-Kubel added a goal at 13:50 of the third period, and Landeskog backhanded an unassisted empty-net goal with 1:50 remaining.

Dallas goalie Braden Holtby stopped 26 shots. Both first-period goals against Holtby came when the Stars allowed Colorado skaters in front of the net.

Landeskog deflected Nathan MacKinnon's shot from the blue line off his stick and into the net at 5:31.

Kadri increased Colorado's lead to 2-0 with his 20th of the season when Makar passed from the right faceoff circle to the front of the net for an easy goal.

The Avalanche asserted themselves early with a 13-5 advantage in shots on goal in the first period. Seven first-period giveaways hurt the Dallas offense. Kuemper turned aside the Stars' best chance in the period when he saved a shot by Roope Hintz alone in front of the net.

Dallas exerted more pressure in the second, outshooting Colorado 14-7, but neither team scored in the period. Kuemper stepped up with 14 saves, four on the Stars' three power plays in the second. Dallas cleaned up its defense, keeping Avalanche skaters away from the area in front.

Aube-Kubel helped Colorado to a 3-0 lead, receiving the puck on the left-wing boards, skating to the top of the slot and beating Holtby with a wrist shot.

NOTES: Colorado's point streak began nearly two months ago after a 5-2 loss at Nashville on Dec. 16. ... The Avalanche have an 11-point lead over Minnesota in the Central Division. ... Kuemper's shutout was the 22nd of his career. MacKinnon returned after missing four games and the All-Star game because of a concussion and facial fracture. ... Dallas C Luke Glendening played in his 600th NHL game. ... Colorado RW Logan O'Connor split two defenders for a chance at his second short-handed goal of the season but missed with his shot. O'Connor also has three short-handed assists. His four short-handed points are tied for the NHL lead. ... Sunday's game was rescheduled from Dec. 29.

The teams play again Tuesday at Colorado in a game postponed from Dec. 31. It's the start of a three-game trip for Dallas.