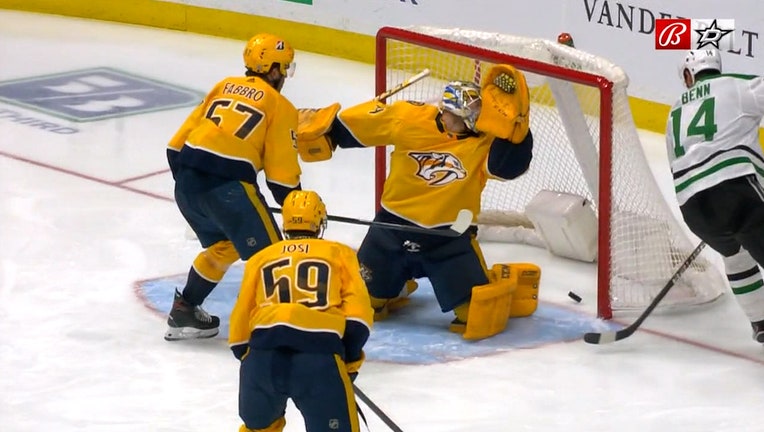 NASHVILLE, Tenn. - Not tested often, Anton Khudobin was there when the Dallas Stars needed him.

Khudobin made 21 saves to lead Dallas to a 4-1 victory over the Nashville Predators on Thursday night.

Khudobin’s best stop came in the first when he denied an attempt from Nashville’s Ryan Johansen while the Predators were on a power play.

"When you are winning, it’s always positive," Khudobin said. "Yes, it’s one game at a time, that’s how it is right now. It’s a lot of games, a tough schedule, so of course when you finish the game on a good note, you start preparing yourself for the next one."

Colton Sissons had the lone goal for the Predators, who snapped a six-game winning streak. Juuse Saros had 27 saves while ending his four-game win streak.

Lindell scored the game’s first goal at 2:39 of the opening period. From the left side, Blake Comeau sent a pass to Lindell at the top of the left circle. There, Comeau skated toward the slot and shook off Predators forward Rocco Grimaldi before firing a quick snap shot that beat Saros on the glove side.

Sissons tied it at 16:21 of the first. Yakov Trenin outbattled two Stars in the left corner before finding Sissons in the left circle. Sissons cut to the low slot and beat Khudobin with a wrist shot high to the glove side.

"I don’t think we did enough," Sissons said. "I thought they had the competitive edge. They were a little cleaner with their game, especially in the second period. They took over a little bit just from our lack of execution."

Robertson made it 2-1 at 8:49 of the second. Roope Hintz carried the puck into the Nashville zone on the right side and then moved across the slot into the left circle. There, he slid a pass Robertson all alone at the right post where he had an easy slam dunk for his third goal in as many games.

"You know coming in against Dallas, it’s going to be a territory game, which team can get into the other team’s zone and go to work," Nashville coach John Hynes said. "We didn’t do that, particularly in the second. I thought that’s where we lost some momentum."

Benn’s sixth of the season came on a power play at 1:41 of the third. Denis Gurianov sent the puck from the right circle in front, where it caromed off of the skate of Predators defenseman Dante Fabbro and then off of Benn and by Saros.

"We got some puck luck finally around the net," Dallas coach Rick Bowness said. "I’ve been saying this all year, that timely goal, that timely save, that’s how close it is."

Heiskanen added an empty-net goal late in the third.

Dallas was 1 for 2 on the power play. In six games played against the Predators this season, the Stars are 11 for 20 on the man advantage, a 55.0% success rate.

The Stars entered Thursday with the NHL’s 7th best power play at 24.1%

Coming off of a hot March where his 11 assists and 16 points led all NHL rookies, Robertson has scored a goal in three-straight games. It is the longest goal scoring streak of his young career. It matches the longest scoring streak by a Stars rookie since the club relocated to Dallas. Gurianov was the last Dallas rookie to score in three straight, doing so in Feb. 2020.

Stars defenseman Joel Hanley played just 4:15 of the first period and Dallas announced after the first that he would not return to the game due to a lower-body injury.

"There wasn’t really long shifts any of us," Lindell said of playing with five defensemen for most of the game. "We kept it rolling, kept it short ones today, so it was fine."

Stars: At Carolina for a back-to-back set with the Hurricanes Saturday and Sunday.