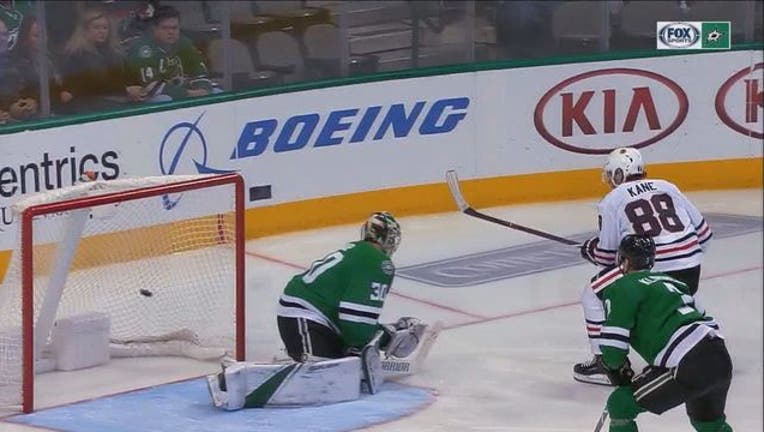 DALLAS (AP) - Patrick Kane had two goals and an assist, and the Chicago Blackhawks beat the Dallas Stars 5-2 on Thursday night for their first win streak in two months.

Alex DeBrincat had a goal and two assists for last-place Chicago, and defenseman Erik Gustafsson scored for the second straight game. Brendan Perlini had an empty-netter, and Cam Ward made 26 saves.

The Blackhawks matched a season high with their second straight win. They hadn't won two in a row since Oct. 23 and 25 against Anaheim and the New York Rangers.

Tyler Seguin and Taylor Fedun scored for Dallas, which lost for the fifth time in six games. Ben Bishop had 24 stops.

The Blackhawks, who have struggled in the first period this season, got off to a rare fast start.

DeBrincat scored on Chicago's first shot on goal 1:12 into the game. David Kampf won a faceoff in the Dallas zone. The puck went to Dylan Sikura, who dropped it back to DeBrincat at the top of the left circle for a wrist shot that sailed inside the right goalpost.

The Blackhawks opened a 2-0 lead on their only power play. DeBrincat set up Gustafsson, who drove a slap shot from the right circle past Bishop at 17:23.

Kane got his 16th goal of the season 1:56 into the second period, skating down the slot and lifting a backhand into the net.

Dallas got on the board at 8:15 when Seguin converted a wrist shot off a pass from Jamie Benn.

In the first minute of the third period, Benn hit the left post with a shot. He helped get Dallas within one at 6:16 by chipping the puck away from Ward after Alexander Radulov left it on the doorstep. The puck went to Fedun with the right side of the net open.

But Chicago put it away on empty-net goals for Kane and Perlini after Bishop left for an extra skater.

Blackhawks: Complete a two-game trip on Friday at Colorado.

Stars: Travel to Minnesota for a game on Saturday before returning home to play the Islanders on Sunday.