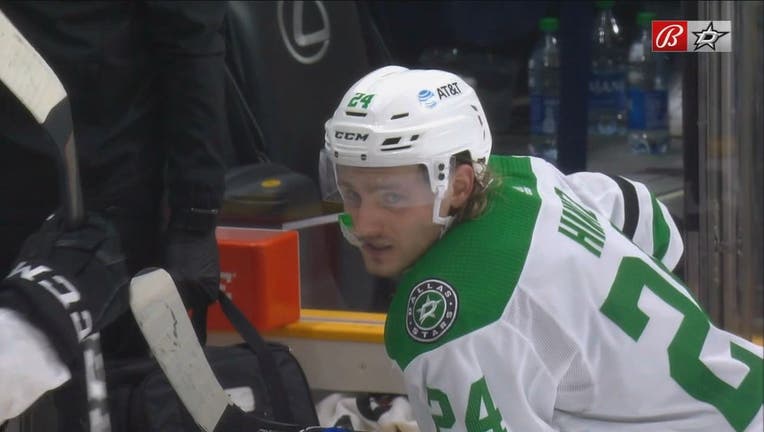 NASHVILLE, Tenn. - Ryan Johansen was the lone scorer in the shootout, leading the Nashville Predators to a 3-2 victory over the Dallas Stars on Sunday night.

Ryan Ellis and Yakov Trenin scored in regulation for Nashville, which has won four of five.

Roope Hintz and Jamie Oleksiak scored for Dallas, which had its two-game winning streak snapped.

It was the fourth time in seven games between the teams this season that they have gone to overtime.

Hintz scored the game’s first goal at 4:56 of the opening period. From the left boards, John Klingberg sent a pass to Hintz in the high slot, where beat Nashville's Juuse Saros with a one-timer.

Saros finished with 24 saves and denied all three of Dallas' attempts in the shootout.

Ellis tied it at 1 at 10:57 of the first with a wrist shot from the right point through traffic that beat Dallas' Anton Khudobin low to the stick side. Khudobin finished with 18 saves.

Trenin gave Nashville a 2-1 lead at 2:09 of the second after his wrist shot from above the left circle bounced off of the left post and in for his third goal of the season.

Oleksiak’s goal at 18:56 of the second sent the teams to the second intermission tied at 2.

The 6-foot-7 defenseman began his coast-to-coast rush inside the Dallas zone on the left side. He skated to center ice and then split three Predators just inside the Nashville blue line before slipping a quick wrist shot by Saros on the short side.

With a goal and an assist, Hintz extended his point streak to three games. During that stretch, Hintz has two goals and six assists. He has recorded multiple points in each of the three games.

Dallas defenseman Andrej Sekera did not play in the third period, with the team announcing he would not return due to a lower-body injury. Just after the midway point of the second period, Sekera blocked a shot from Predators forward Viktor Arvidsson with Nashville on a power play. Sekera did not take another shift after skating to the bench in obvious discomfort after blocking the shot.

The injury-plagued Predators were forced to make a lineup move before the game, but this time, it was not due to a player being sidelined with an injury. Earlier Sunday, Predators forward Michael McCarron was assessed a two-game suspension as a result of his match penalty for head contact in the final minute of Saturday night’s loss to the Tampa Bay Lightning. In the game’s waning seconds, McCarron hit Tampa Bay’s Yanni Gourde in the neutral zone.

Rookie Tanner Jeannot was recalled for the game and played just his second NHL contest.

Nashville has featured 12 different rookies in the lineup this season, a franchise record.