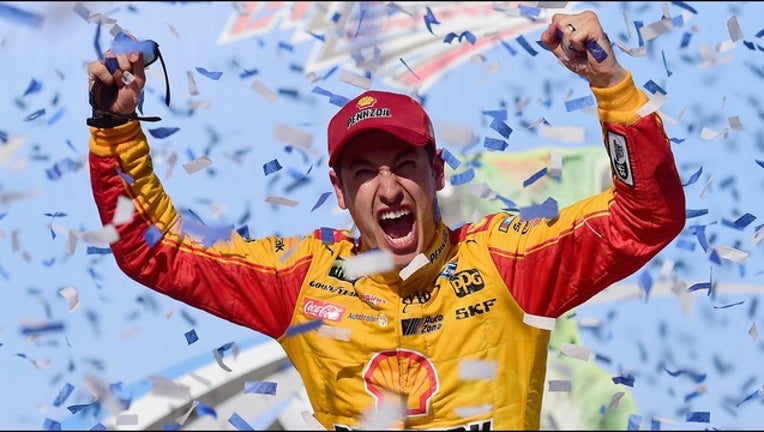 TALLADEGA, Ala. (AP) - Joey Logano had a clear race track in his windshield and a pack of fellow Ford drivers on his bumper. That combination helped the Team Penske driver snap a nearly yearlong losing streak.

Logano won Sunday at Talladega Superspeedway to snap a streak that dated to April 30 of last year. That win at Richmond was later disqualified because his car failed inspection, so the benefits from the victory were stripped and it cost him a spot in the playoffs.

Out front at Talladega, which is usually the worst place to be in the closing laps, Logano couldn't be caught. His Ford teammates were committed to getting a Ford the win, and they waited patiently in line until the closing laps to make their attempt at snatching the victory away from Logano.

Only Kurt Busch was bold enough to make an early move, and he wrongly thought defending race winner Ricky Stenhouse Jr. would go with him. Stenhouse didn't get to Busch in time, Kevin Harvick wasn't prepared for Busch to go so early, and Busch couldn't garner enough steam to catch Logano.

Logano sailed to an easy victory at a track where he should have been forced to defend several attempts at a pass on the final lap.

"I really thought (Busch and Harvick) were the cars, no matter where they went, if they got to the outside of me, I was hosed. I knew that. That would have been the end of it for me," Logano said. "I would have gotten passed by pretty much the whole train. I would have lost so much momentum. I knew they were going to work together, as they should. Once they got picked apart, think that was the game changer."

It was Logano's third career win at Talladega.

Chase Elliott was third in a Chevrolet for Hendrick Motorsports, while Kevin Harvick was fourth in a Stewart-Haas Racing Ford. Ricky Stenhouse Jr. was fifth, David Ragan sixth and Aric Almirola seventh as Ford drivers took six of the seven spots.

Elliott said the Fords had too strong and steady of a strategy for him to have any chance at making a move to catch Logano.

"I thought for sure one of them wanted to win more than they showed," Elliott said. "If it was me, I would have wanted to do something or try. They were not interested in advancing. They were not going to help me move forward."

Busch said his intention was to work with Stenhouse to help SHR get a victory from either Busch or Harvick.

"Two Stewart-Haas cars running second and third should have been able to pull this off," Busch said. "I'm happy that a Ford won. It wasn't the right one. Kevin was in good position. I was going to roll with him in any direction that I could. We just got broken up by Stenhouse.

"You wish you could go over and do it again. I feel like I left that one out on the table. "

Harvick felt Busch made his move too early.

"The Fords are so fast, we had five or six lined up there, and Kurt went a lap before I was ready," Harvick said.

Other events at Talladega:

He was part of a 14-car accident late in the race when he slid in front of teammate William Byron to start the melee that knocked out two Team Penske cars - Brad Keselowski and Ryan Blaney - as well as second stage winner Paul Menard.

Johnson thought as he closed in on Byron, the air was taken off his Chevrolet.

"I was in the second lane and he came up near my lane and then packed air underneath us and around it went," Johnson said.

Jamie McMurray was involved in two accidents at Talladega, including a frightening crash during a practice session in which his Chevrolet rolled several times.

He didn't catch any breaks on Sunday and was in an early accident that led to a 28th-place finish.

The rules package NASCAR used Sunday at Talladega made the cars difficult to drive and changed the dynamic of a race that usually is marked by multiple accidents.

"The cars weren't handling really good, so you had to be very cautious with the runs that you had and where you had them," Johnson said.

Drivers weren't able to make big moves or slingshot passes, and it created a lot of single-file racing.

"I think the cars are a handful to drive and I think that is why we have seen a lot of single file racing, just because everybody's confidence in their cars isn't as high as it has been in the past," Kyle Larson said. "Less big moves and stuff, so I think it kind of gets single file because of that."