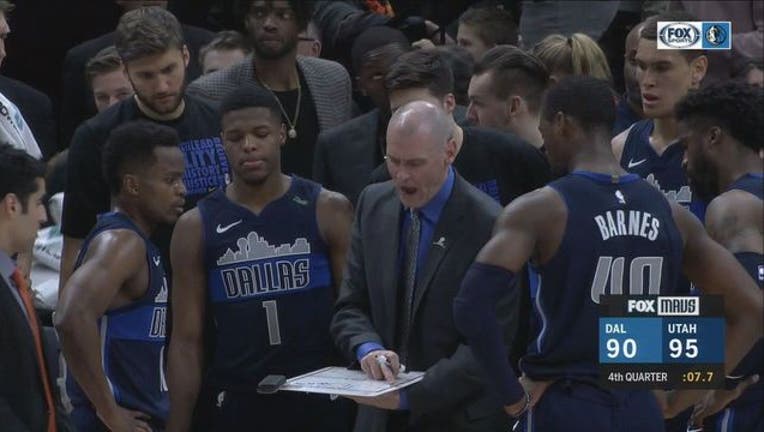 SALT LAKE CITY (AP) - Donovan Mitchell had 25 points, five rebounds and five assists, and the Utah Jazz beat the Dallas Mavericks 97-90 on Saturday night for their 12th win in 13 games.

After tying it up three times in the fourth quarter, the Mavericks finally took an 87-85 lead on a jumper from Barea. But Utah answered with an 8-0 run, punctuated by a Gobert dunk, to go ahead 93-87 with 2:32 remaining.

Utah strung together an 18-6 run to take a double-digit lead before the end of the first quarter. Jae Crowder drove for a pair of baskets and pulled up for a 3-pointer to help fuel the surge. His third basket gave the Jazz a 33-18 lead.

Dallas erased Utah's advantage before halftime. Doug McDermott scored back-to-back baskets and Barea followed with a layup to ignite a 15-0 run for the Mavericks. Dwight Powell gave Dallas its first lead on a pair of free throws and then finished off the run with a hook shot to put the Mavericks ahead 49-42.

Utah missed 11 of 13 shots to open the second quarter before closing out the half on an 11-1 run. The Jazz took a 53-50 halftime lead after Mitchell capped the spurt with his second 3-pointer of the night.

Mavericks: Barea made his 500th 3-pointer with Dallas. He is just the eighth player to reach 500 3-pointers with the team. . McDermott scored nine of his 12 points in the second quarter.

Jazz: Joe Ingles recorded his 150th 3-pointer of the season in just 60 games. Ingles is No. 3 among Jazz players for most 3-pointers in a single season, trailing only Randy Foye (178) and Rodney Hood (161). ... Utah outscored Dallas 11-0 in fast-break points during the first half and finished with a 15-3 advantage.

Mavericks: Host the Pacers on Monday.

Jazz: Host the Rockets on Monday.