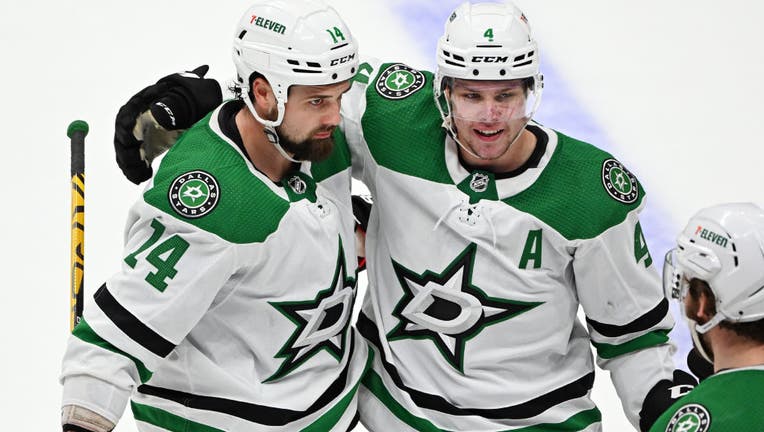 ANAHEIM, CA - MARCH 31: Dallas Stars center Jamie Benn (14) and defenseman Miro Heiskanen (4) on the ice after Benn scored the game winning goal in overtime of an NHL hockey game against the Anaheim Ducks played on March 31, 2022 at the Honda Center

Benn skated past two Ducks and converted a pass from Miro Heiskanen for his 17th goal of the season for the Stars, who have won five of six overall. Despite playing cautious, colorless hockey for long stretches this week, Dallas swept a two-game mini-series at Anaheim to stay in the thick of the playoff race.

"Every game from here on out is huge," Benn said. "We need to find ways to win games, and we did that tonight. ... There are going to be a lot of tight games. Our group has been through a lot the last couple of years. We're comfortable in these types of games, and we find a way to win."

Kevin Shattenkirk scored a tying goal with 3:21 left in regulation, but the Ducks still lost their 11th consecutive game. John Gibson stopped 32 shots for Anaheim, which lost a franchise-record 12 straight during the 2018-19 season, leading to coach Randy Carlyle's firing.

"I didn’t think we were ready to play," Ducks coach Dallas Eakins said. "We didn’t come out in that first period with a lot of anger, but I thought we did play better after the first. ... Overall it was a good effort with the guys we have in our lineup, but we've got to find a way to get on the other side. That is a huge challenge right now."

Ryan Suter scored in the first period for Dallas, and Jake Oettinger made 21 saves for his second straight win over Anaheim. Two days earlier at Honda Center, the Stars rallied from a third-period deficit with two goals for a 3-2 victory.

"Sometimes those games are tough," Suter said. "They've really got nothing to play for. I mean, they’re playing for their pride. They came at us. We kind of gave them the momentum in the second period, and then stuck with it and came out on top."

Andrej Sekera scored a tiebreaking goal with 4:09 to play in the rematch for Dallas, jumping on a loose puck in the slot to score his first goal in 29 games this season.

Shattenkirk evened it 48 seconds later for the Ducks, deflecting Urho Vaakanainen's shot for his eighth goal of the season. Vaakanainen's assist was his first point since joining Anaheim in the trade of Hampus Lindholm to Boston nearly two weeks ago.

"I love how we stuck with it at the end there," Shattenkirk said. "We gave up that late goal, but our mindset on the bench was, ‘Let’s go out there and keep playing and hope for a chance.’"

Jamie Drysdale scored his first goal since Dec. 1 for Anaheim, which earned a point for only the fourth time in 14 games in March as a once-promising season went completely sideways.

The Stars scored first on a power play when Suter knocked in a loose rebound near the crease for his sixth goal of the season.

Anaheim was offensively inert for most of the first two periods, but Gibson kept the score close until Drysdale converted on two fortunate bounces with 40 seconds left in the second. After Drysdale flung the puck in from the point, it ricocheted off the rear boards and in off the back of Oettinger's skate for the defenseman's fourth goal.

"It's one of those you just laugh about," Oettinger said. "Weird, fluky goal. Hopefully we'll get a couple of those. ... Just a one-in-a-million-like angle, and it just rolled up my skate and in."

Drysdale, who turns 20 next week, is a playmaking rookie defenseman who had hit an offensive drought. He has played in all but one game this season for the Ducks, but hadn't scored a goal in 43 games.

Dallas defenseman John Klingberg got frustrated and accidentally hit linesman Vaughan Rody with the puck in the third period. Rody went down hard, but stayed in the game.

Marian Studenic appeared in his seventh game this season for Dallas in place of healthy scratch Denis Gurianov, who hadn't missed a game since Jan. 15. Sekera filled in for defenseman Esa Lindell, who has an upper-body injury.

Stars: At the San Jose Sharks on Saturday.

Ducks: At the Arizona Coyotes on Friday.