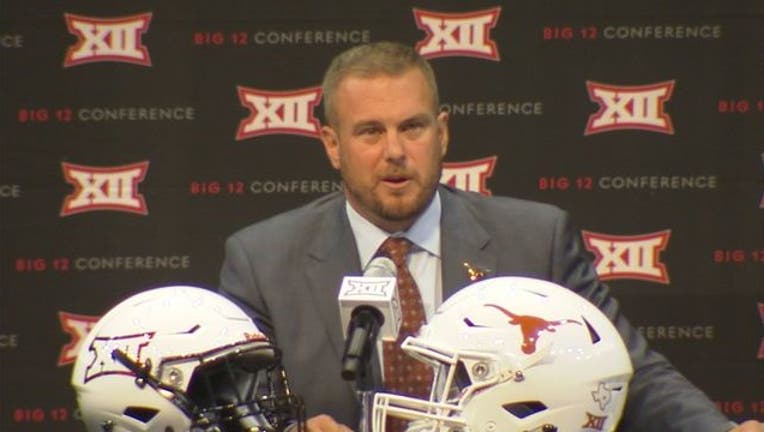 AUSTIN, Texas (AP) - The chase was on for Tom Herman.

In late 2016, Texas and LSU were both eyeing the young hotshot coach from Houston until a wild Thanksgiving weekend that included a Tigers win, a Longhorns loss and leaked details of contract negotiations swung Herman to Texas and pushed LSU to elevate interim coach Ed Orgeron to the top job in Baton Rouge.

It wasn't necessarily friendly and the last few hours were tense. There were some harsh words from LSU to Herman's agent as school officials thought he was trying to start a bidding war before everyone decided they'd hired the coach they wanted all along.

As for Herman and Orgeron, they like the colors they'll be wearing Saturday night when the No. 6 Tigers visit No. 9 Texas in one of the top non-conference matchups of the 2019 season.

"Don't care," Orgeron said this week when asked about LSU's pursuit of Herman. "I'm happy to be the coach at LSU. This is about our football players against their football players. None of that means anything."

Herman wasn't going there either.

"This is my dream job," Herm said. "I'd prefer not to waste anybody's time talking about something that happened three years ago."

Things could have been much different.

The two programs were facing rough times and needed to make the right hire. Texas was winding up its third straight losing season under Charlie Strong. LSU had fired Les Miles earlier in the season but had gone 5-2 with Orgeron as interim coach.

Each Texas loss increased pressure to fire Strong. LSU had already cast a long and wide net in search of a permanent coach.

Orgeron was winning, but he'd also been fired from Mississippi in 2007 with three-year record of 10-25 and a winless final season in the Southeastern Conference. He went 6-2 as interim head coach at Southern California in 2013 but was passed over the top job and eventually landed on Miles' staff at LSU.

Herman was college football's rising star at Houston, where he was elevating a Conference USA program with wins over Florida State and Oklahoma. That success grabbed Texas' attention and it kept getting stronger with each Longhorns loss.

Mike Perrin, then Texas athletic director, is from Houston. He heard and saw the Herman hype at full volume.

"'H-Town takeover' they called it," Perrin said. "I watched the energy around that organization. He was high on my radar."

Plus Herman had Texas roots. He'd been a graduate assistant on Mack Brown's staff and knew all the fertile highways and byways of recruiting the Lone Star State.

But Texas didn't have an opening yet, and LSU was already probing Herman's interest in joining the mighty SEC. Things didn't get crazy until the final week of the regular season.

Texas fans hit their boiling point when the Longhorns lost at Kansas. But Strong still had a final game to play and if he could beat TCU to finish 6-6 and get to a bowl game, there was a good chance the first black head coach in program history could keep his job.

Then, on Thanksgiving, shortly before Orgeron and LSU went on the road and pummeled Texas A&M, the story broke that LSU was close to a deal with Herman. LSU won the game but the report made for some uncomfortable hours at LSU and Texas.

LSU was angered by the media leak. Texas backers who wanted Herman were agony because they were about to miss their guy. The next day, Texas lost to TCU, pushing Perrin and Texas into overdrive on Herman.

Perrin, who had seen the Herman-LSU connection splashed on social media - "I read Twitter, too," he said - was pressing overnight for a Texas deal with Herman.

"The pace was pretty intense," Perrin said. "My impression was he always wanted to come to the University of Texas."

By morning, LSU and Herman had cut off negotiations. Orgeron was winning and wanted to be there.

"At that point, we huddled and said, 'Why are we going over there? We know who we want. Texas knows who they want. Let's call it a day,' because your gut is always right," New Orleans businessman and LSU board member Stephen Perry.

The coaching announcements unfolded over a matter of hours. Strong was fired on Saturday morning. By the afternoon, Orgeron was hired at LSU and Texas announced the Herman hire soon after.

Both schools see their choices as the right ones.

Since getting the promotion, Orgeron is 20-7 and 2-1 in bowl games with the Tigers. Herman is 18-10 and 2-0 in bowls with the Longhorns. Both programs finished in top 10 in 2018 and started there this season. Both are eyeing potential runs for the College Football Playoff.

"Not taking anything away from Tom; he's a great coach as well," LSU linebacker Patrick Queen said. "But I just feel like coach O fits us better. That's who we want ... That's who we're going to fight for."