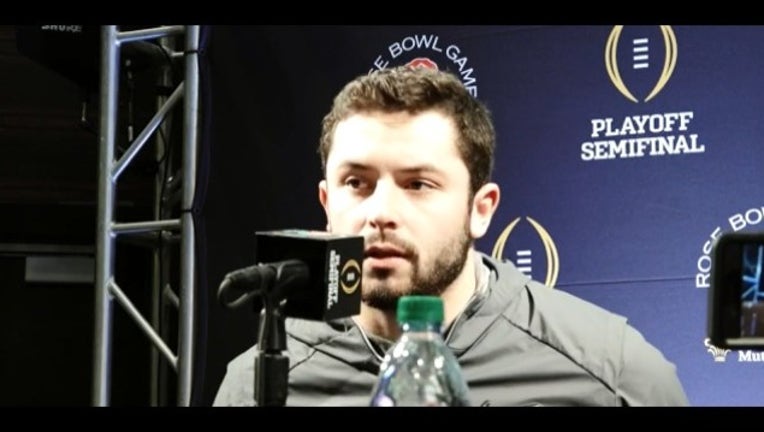 LOS ANGELES (AP) - Oklahoma quarterback Baker Mayfield made it to Rose Bowl media day after all, swooping in late and providing a jolt of drama as he noted he has been dealing with "flu-like" symptoms.

The Heisman Trophy winner missed the first half of the 45-minute session Saturday morning at a downtown hotel, but arrived in time to meet with the media for the first time this week ahead of the College Football Playoff semifinal between the second-ranked Sooners and No. 3 Georgia on Monday night.

Mayfield was not expected to attend as he's been dealing with the illness the past few days.

Mayfield's unexpected entrance had reporters and camera operators scrambling to get to the dais where he was speaking, in the corner of a ballroom crowded with reporters, plus Oklahoma's entire roster and coaching staff. Mayfield said he changed his mind about missing media day after turning on the television at the team hotel and seeing coach Lincoln Riley answering questions about the quarterback's status.

"I realized this whole thing is not about me," Mayfield said. "Oklahoma is here to play a playoff game. It's not about any sickness that I have. We're here to win a game, and that's what it needs to be about. My teammates don't need to answer questions on my behalf. I'm not dying. I'll be playing."

Drinking a cup of coffee with honey and lemon because Mayfield was sick of drinking tea, the only noticeable sign of illness was his raspy voice. That was as much a product of yelling during practice Friday as it was being under the weather, Mayfield said.

"I hope I'm 100 percent on Monday. I think I will be," said Mayfield, who has thrown for 4,340 yards and 41 touchdowns against five interceptions this season.

Mayfield has been at practice each day this week. He said the practices have been a little tougher than usual.

"But I'd rather go out there and practice than have to go do other activities. I'd rather by with my teammates and working on our game plan," Mayfield said.

He did not attend the team's trip to Disneyland on Wednesday, dinner on Thursday or his scheduled media availability Friday.

Mayfield started getting sick when he was home for Christmas in Austin, Texas. When the team reconvened in Norman, Oklahoma, it just got worse. The former walk-on at Texas Tech does not believe the illness will hinder how he plays against the Bulldogs.

"We look pretty good right now," Mayfield said. "I think we're practicing well. I think we're settling into the game plan. Been working on it for a while, and I'm confident where we're at right now."

The absence of Mayfield has not diminished his presence in the buildup to the Rose Bowl. Teammates and co-offensive coordinator Cale Gundy were pestered with questions about his status on Friday. Georgia coach Kirby Smart has raved about Mayfield's ability to consistently make "wow" plays.

Even Bulldogs freshman walk-on Stetson Bennett, the scout team quarterback who has been mimicking Mayfield to prepare the Georgia defense, was a popular interview subject on Saturday.

"You love having fun, and he has the most fun out there," Bennett said. "He's the most exciting player. I got excited when we found out we had to play them."