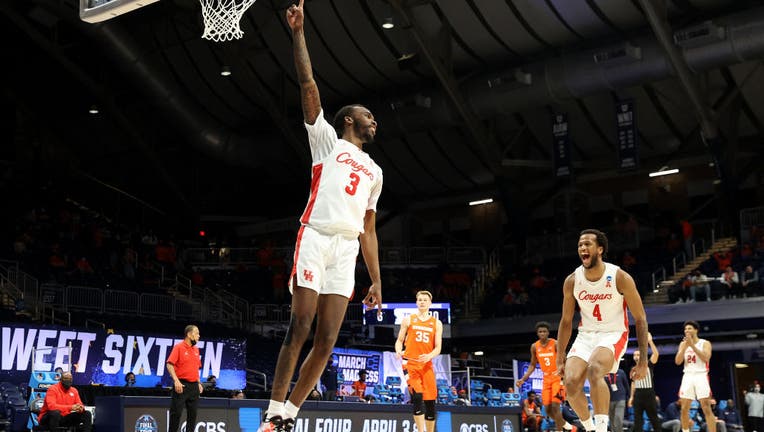 INDIANAPOLIS, INDIANA - MARCH 27: DeJon Jarreau #3 of the Houston Cougars reacts after a play against the Syracuse Orange in the second half of their Sweet Sixteen game of the 2021 NCAA Men's Basketball Tournament at Hinkle Fieldhouse on March 27, 20

INDIANAPOLIS (AP) - Houston contested every 3-pointer, took away clean looks and forced "Buddy Buckets" to work for any sliver of space he could find.

Defense has been the Cougars' strength all season. Now it's taken coach Kelvin Sampson's team somewhere new: the program's deepest NCAA Tournament run since the days of Olajuwon, Drexler and the famed "Phi Slama Jama."

Quentin Grimes scored 14 points and Houston's defense locked down on surging Buddy Boeheim, helping the Cougars beat Syracuse 62-46 on Saturday night in the Sweet 16 while holding the Orange to their lowest point total in an NCAA Tournament game.

That sent the second-seeded Cougars through to their first regional final in 37 years, earning a matchup with No. 12 seed Oregon State for the Midwest Region title and a spot in the Final Four.

"Obviously, we know the excitement we're bringing to the city of Houston and to the university," said DeJon Jarreau, who flirted with a triple-double while leading the defensive effort on Boeheim. "We're very happy for that, but we have a mission to accomplish."

Houston hadn't reached a regional final since a run of three straight Final Fours with its high-flying style under coach Guy Lewis in the 1980s. Future NBA greats Clyde Drexler and Hakeem Olajuwon were teammates on the 1983 team that reached the title game before losing on a shocking last-play dunk to North Carolina State's "Cardiac Pack" coached by Jim Valvano.

The next year, Olajuwon led the Cougars back to the 1984 final before losing to Patrick Ewing and Georgetown.

And now Sampson's bunch has the once-proud program back within a win of the Final Four.

Houston (27-3) came in holding opponents to a national-low 37.3% shooting, and then harassed Syracuse (18-10) into just 28% (14 for 50). That included a 5-for-23 performance from 3-point range that ultimately derailed the 11th-seeded Orange’s latest postseason push as a double-digit seed.

"We just talked all week about five people guarding the ball," Sampson said. "It's not one person or two people, it's five — five people had to be in the right spot. I thought for the most part, we were."

Syracuse's previous low tournament output was 51 points against Princeton in the 1992 first round.

"It’s the best defense that that we’ve seen this year and they deserved to win," coach Jim Boeheim said.

Jarreau, the American Athletic Conference's defensive player of the year, stood out on that front.

Buddy Boeheim, son of Syracuse's Hall of Fame coach, had been on an absolute tear through four games in the Atlantic Coast Conference and NCAA Tournaments to earn that "Buddy Buckets" moniker.

The 6-foot-6 junior had averaged 28.3 points through those games, which included him shooting 60% from the floor and 55.8% from 3-point range.

Jarreau spent much of the night hovering in Boeheim's shadow on the perimeter, staying right on his hip on drives and swiping at the ball as Boeheim secured catches.

Boeheim managed just one first-half basket and finished with 12 points on 3-for-13 shooting, including 1 for 9 from 3-point range.

"He just jammed me coming off screens, jammed handoffs," Boeheim said. "Whatever it was, he was great. I got some looks I've got to make, and I put that on myself, but I mean he’s a really good defender and they’re a great defensive team."

The Orange couldn’t muster much else, either. Joseph Girard III (12 points) was their only other double-figure scorer.

Syracuse: The Orange had beaten two higher-seeded opponents to reach the second weekend, first against sixth-seeded and 2019 NCAA finalist Texas Tech. Then came a second-round win against third-seeded West Virginia and 900-win coach Bob Huggins. Syracuse had shot at least 52% each time while making 29 3-pointers — but there would be no repeat of that unexpected 2016 Final Four run thanks to Houston's defense.

Houston: The Cougars showed off a strong finishing kick again. They needed a game-ending 14-2 run to rally past Rutgers and return to the Sweet 16. This time, they ran off a 9-0 spurt — beginning with a whistle-drawing jumper from Justin Gorham and a free throw — that finally stretched out the lead to 60-43 with 2:17 left. Gorham finished with 13 points and 10 rebounds, including some effective play from the high post against Syracuse's zone.

Jarreau finished with nine points, eight rebounds and eight assists and said he didn't feel any issues with a hip injury sustained last week. He also battled cramps late in this one.

"He's a tough kid. Smart, too," Sampson said. "Very high basketball IQ. You can't be a great defender if you're not smart."

The Cougars advanced to Monday’s regional final to face 12th-seeded Oregon State. The Beavers beat eighth-seeded Loyola Chicago 65-58 earlier Saturday to emerge from the upset-riddled top half of the region bracket.