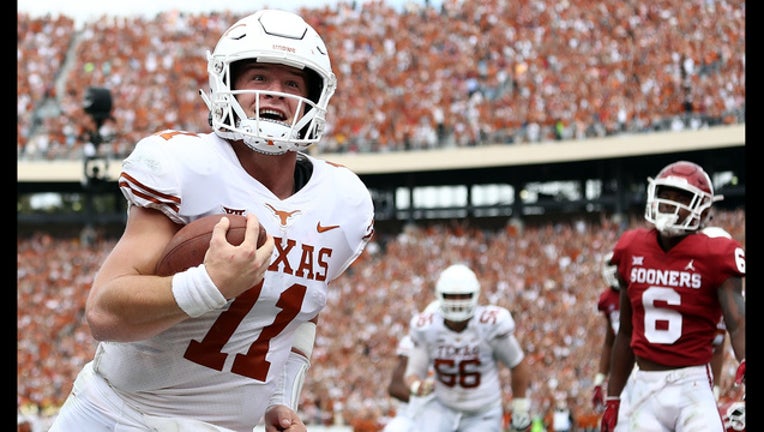 Sam Ehlinger of Texas smiles as he runs into the endzone for a touchdown against Oklahoma in the second quarter of the 2018 AT&T Red River Showdown at Cotton Bowl on October 6, 2018 in Dallas, Texas. (Photo by Ronald Martinez/Getty Images)

DALLAS (AP) - Freshman Cameron Dicker kicked a 40-yard field goal with nine seconds left to give 19th-ranked Texas a 48-45 victory Saturday over No. 7 Oklahoma after Kyler Murray had rallied the Sooners with three touchdowns in the fourth quarter.

Sam Ehlinger ran for three touchdowns and threw for 314 yards with two more scores for Texas (5-1, 3-0 Big 12), which has its first five-game winning streak since 2013. The sophomore quarterback converted third-and-3 on Texas' final drive with a 4-yard keeper and his 8-yard draw to the middle of the field set up the winning kick .

The Longhorns took a 45-24 lead into the fourth quarter before Murray threw a 19-yard TD pass to Lee Morris and ran 67 yards for a score on a one-play drive. Trey Sermon's 7-yard run for the tying touchdown with 2:38 left gave the Sooners three TDs in a span of six minutes.

Oklahoma (5-1, 2-1), the three-time defending Big 12 champion, lost to the Longhorns for the third time in six seasons. This was the first time in that span Texas was ranked for the Red River Rivalry, which had never had more combined points in a 113-game series that dates back to 1900.

Murray completed 19 of 26 passes for 304 yards and four touchdowns, and ran for 92 yards. But he also had two turnovers, only his third interception of the season and a big fumble in the third quarter when he lost control of the ball when scrambling.

Five plays after Murray's fumble, not long after his 77-yard TD pass to Marquise Brown, the Longhorns led 38-24 when Ehlinger burst into the end zone on a 2-yard run. Ehlinger flashed the "Hook 'Em Horns" sign to the burnt orange-clad end of the Cotton Bowl Stadium, where the crowd of 92,300 was split 50-50 for the annual showdown at the State Fair of Texas.

Brown had nine catches for 131 yards and two TDs. His long TD was his national-best seventh catch of at least 40 yards this season.

Lil'Jordan Humphrey had nine catches for 133 yards and a touchdown, and his 2-yard TD pass to Collin Johnson capped the first Texas possession of the game.

Texas: With the most impressive of their three victories this season over Top 25 teams, even with the late comeback by the Sooners, the Longhorns are suddenly a front-runner for the Big 12 title. They haven't won the Big 12 since 2009, the last time they played in a national championship game. Only Texas and No. 9 West Virginia, which visits Austin on Nov. 3, made it through the first three conference games without a league loss.

Oklahoma: Murray made an impressive comeback after his fumble, which came when he was trying to brace himself from falling down. The Sooners have plenty of time to recover to make it into the Big 12 championship game, and if they can win out will still get consideration for their third College Football Playoff bid in four years.

The Longhorns should move up a few spots, but both Texas and Oklahoma could be behind West Virginia, the only undefeated Big 12 team.

Texas is home next Saturday against Baylor.

Oklahoma has its bye week before returning to Dallas-Fort Worth to play at TCU on Oct. 20.