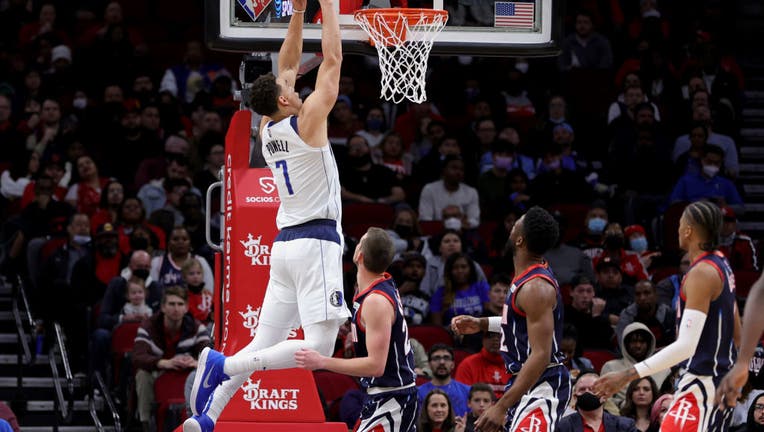 HOUSTON, TEXAS - JANUARY 07: Dwight Powell #7 of the Dallas Mavericks dunks the ball during the first half against the Houston Rockets at Toyota Center on January 07, 2022 in Houston, Texas. NOTE TO USER: User expressly acknowledges and agrees that,

HOUSTON (AP) - Tim Hardaway Jr. had 19 points and seven assists to lead the Dallas Mavericks to a 130-106 win over the Houston Rockets on Friday night despite missing two stars and their head coach.

Dallas was without Luka Doncic, who was sidelined with a right ankle sprain, and Kristaps Porzingis, who missed his fourth straight game in the NBA's health and safety protocols.

Dallas was also missing coach Jason Kidd, who entered the health and safety protocols on Friday -- becoming the 13th NBA coach to do that. Assistant coach Sean Sweeney stepped in his place.

Reggie Bullock started in Doncic's place, putting up 15 points, seven rebounds and four assists. Josh Green had 17 points, and Dwight Powell and Jalen Brunson each had 15 points for Dallas.

The Mavericks won their fifth straight game, and are 6-9 without Doncic this season, compared with 15-9 when he plays.

The Mavericks got off to a hot start, scoring a season-high 43 first-quarter points to enter the second quarter with a 20-point lead. Dallas also had a season-high 80 first-half points and led 80-60 at the break.

After a 114-111 win in Washington snapped Houston's eight-game losing streak, the Rockets struggled defensively, allowing Dallas to shoot 54.4% from the field.

Mavericks: Doncic participated in a pre-game shootaround workout and sat on the bench during the game. . C Boban Marjanovic remained in the health and safety protocols for a sixth straight game.