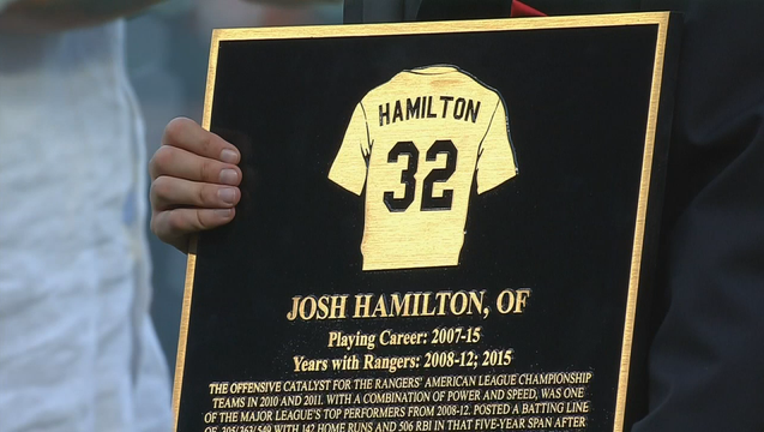 ARLINGTON, Texas (AP) - Josh Hamilton said he had forgotten how the grass looked and smelled at the home of the Texas Rangers. He hadn't been there since playing in the AL Division Series four years ago.

Hamilton, the 2010 AL MVP the season the Rangers went to their first World Series, was back for the first time Saturday night for his induction into the team's hall of fame.

"That was fun," the five-time All-Star said after the team showed a video filled with highlights of his five-plus seasons in Texas, including big home runs and incredible catches in the outfield.

The slugger's story is well-documented, from being the first overall pick out of high school in the 1999 amateur draft by Tampa Bay, to the drug and alcohol addictions that nearly destroyed his career. He was out of baseball for 3½ years before his comeback, making his big league debut with Cincinnati in 2007 before being traded to the Rangers after that season.

"Looking back reminds me of God's grace and his mercy," said Hamilton, sharing his Christian faith during his induction speech. "Some people will say that I'm a hypocrite, or they have said it. I simply say I'm human. Y'all know my story. You can't look at that and tell me that you think I did that all on my own, or with just willpower. It didn't happen. That much willpower doesn't exist in the world."

Hamilton thanked a long list of people, including his parents and three daughters who were with him on the field. The 38-year-old fondly talked about the Rangers organization, including former coaches and teammates. General manager Jon Daniels, who traded top pitching prospect Edinson Volquez to the Reds for Hamilton, was there to unveil the player's plaque.

The highlights included clips from his awe-inspiring display in the Home Run Derby at Yankee Stadium in 2008, when he led the American League with 130 RBIs while hitting .304 with 32 homers in his first full season. He hit four homers in the 2010 AL Championship Series and had a four-homer game at Baltimore in 2012.

Former Arlington Mayor Richard Greene, who during his time in office from 1987-97 played a major role in a getting the team a new stadium and keeping the Rangers in Arlington, was also inducted into the Rangers' hall.

He left the Rangers in free agency after the 2012 season for a $125 million, five-year deal with the Los Angeles Angels. He was recovering from shoulder surgery when the Angels traded him back to Texas in 2015 after two injury-plagued seasons in Los Angeles. After 50 games in 2015, he had surgery on his left knee at least three times and never played again, even after going to spring training two more times.

Minnesota Twins manager Rocco Baldelli, who was in the visiting dugout Saturday night, was the first-round draft pick by Tampa Bay the year after Hamilton, and they came up in the Rays organization together.

"I grew up with him in the game and had a chance to watch him. He's the single most talented baseball player I've ever been around," Baldelli said. "If you drew up like a prototype kind of superhero type baseball player, like that's what he was. He was a well above average runner. He had great instincts in the field. He had the best arm in baseball."

With the induction of the former slugger and past mayor, there are now 22 people in the Rangers hall. Hamilton and Greene were the first inductees in three years since Michael Young, whose No. 10 jersey will be retired by the team in two weeks.

There are only 21 home games left at the current Globe Life Park in Arlington, which is in its 26th season. A new stadium with a retractable roof is nearly three-quarters complete across the street and will open for the 2020 season.

"It just adds significantly to the opportunity," Greene, who supports the new stadium, said about being inducted in the stadium he helped build. "This is certainly a bittersweet season for us that love this place and have spent 25 years here."