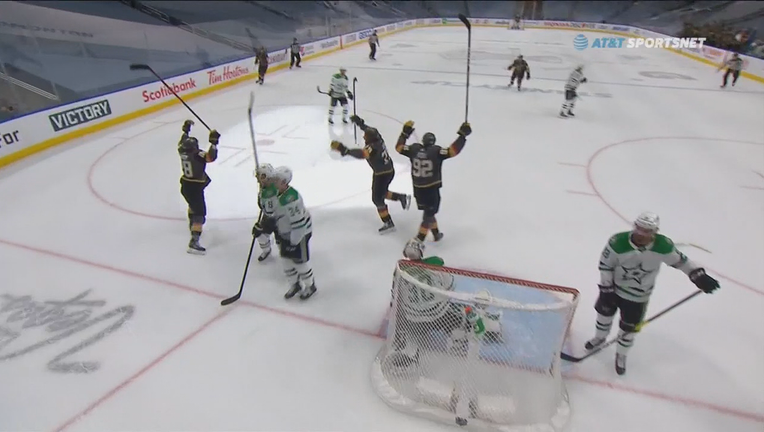 EDMONTON, Alberta - EDMONTON, Alberta (AP) — Will Carrier scored the tiebreaker with 5:12 left in the game, Robin Lehner had 24 saves and the Vegas Golden Knights beat the Dallas Stars 5-3 in Western Conference round-robin play on Monday.

Carrier backhanded a rebound off the back wall through his legs to beat goaltender Ben Bishop after the Knights rallied from a 3-1 third period deficit. Vegas scored three times in 5:02 to turn the game around, and added an empty-netter with 21 seconds left.

“Whatever it takes to get it there,” Carrier said of his unconventional shot.

Chandler Stephenson, Mark Stone, Nate Schmidt and William Karlsson also scored for the Knights, who pick up two points in this week’s tournament to determine seeding in the next round of the playoffs.

“We found our game in the third,” Stone said. “It was good, almost picture perfect,”

Before the game at Edmonton's Rogers Place,  two players from each team knelt in support of Black Lives Matter and other social causes. Dallas forwards Tyler Seguin and Jason Dickinson knelt alongside Vegas forward Ryan Reaves and goaltender Robin Lehner during the American and Canadian national anthems.

“It's time to start doing start doing something, not just let this be a news cycle and forget about it and do it all over again,” Lehner said in explaining his decision to take a knee. “Everyone should have the same chance in society, everyone should be treated the same."

Lehner is white and teammate Reaves is Black. Both the Stars players who knelt are white.

“Definitely being two white guys, to do what we did, I wanted to be a part of that movement if there was opportunity," Seguin said. “I can’t say honestly that I was going to go out there on my own and take a knee. But with them having a Black player on their team and his beliefs and how I’ve said from day one I’m going to back it up in ways that I can, that's why I chose to support that.”

Joe Pavelski, Jamie Oleksiak and Corey Perry scored for Dallas in the game, and Bishop had 28 saves.

The Knights got on the board with their first shot of the game. Stephenson, skating in place of the injured Max Pacioretty, moved into the slot and beat Bishop at the 1:04 mark.

The Stars rallied in the second period, scoring a pair of goals within 42 seconds. First,  a Pavelski shot scooted under Lehner's blocker off the skate of the Knights' defenseman Alec Martinez at 7:50. Then Oleksiak rifled a shot past the goalie's glove to give the Stars a 2-1 lead.

Dallas grabbed the 3-1 advantage when Perry scored 12:42 into the second.

Momentum shifted back to Vegas in the third, with the Knights scoring twice in 1:29 to tie the game, thanks to Stone and Schmidt, setting up Carrier's game-winner. That came after Vegas coach Pete DeBoer switched up his lines.

“We really didn’t have anybody who was very good in the first 40 minutes,” said DeBoer, who was hired to replace the fired Gerard Gallant in January.

“I think we just let them come at us," Dickinson said. "We didn’t take ownership of the game, and it was obviously an embarrassing third period that we don’t want to repeat. But it’s something we can learn from.”

NOTES: Vegas is the fourth team in NHL history to make the playoffs in each of its first three seasons. ... This marks Dallas’ second consecutive trip to the postseason and the fourth over the past seven seasons. ... Stars coach Rick Bowness is the third bench boss in NHL history to hold a head coaching position in five different decades. ... Over the past two seasons, Stars' goaltenders have posted a league-leading 2.48 goals against average, allowing just 374 goals in 151 games in that span.

Stars: Face Colorado in another round-robin game at at 6:30 p.m. EDT on Wednesday.

Golden Knights: Play St. Louis on Thursday in a round-robin game, time to be announced later.