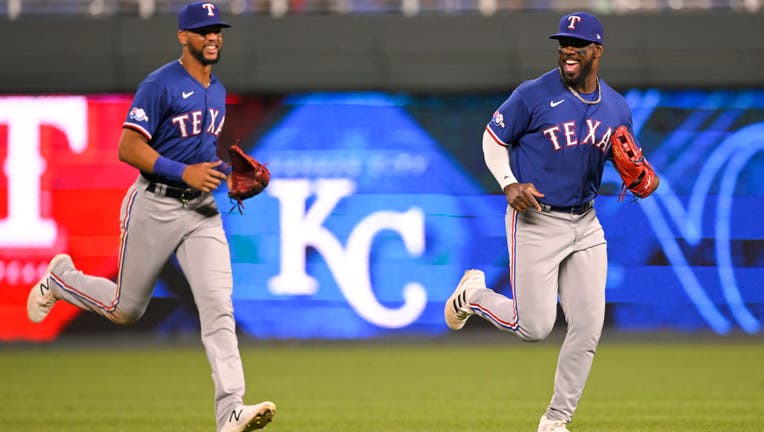 KANSAS CITY, Mo. - Mitch Garver and Kole Calhoun each had two hits, two runs and two RBIs, leading the Texas Rangers to a 10-4 win over the Kansas City Royals on Monday night.

Garver’s two RBIs came on his eighth homer of the season in the fifth inning as the Rangers won for the third straight season on manager Chris Woodward’s birthday.

"I asked for double-digits and they got it for me," Woodward said. "Our team is so talented ... I know hitting is hard. I was a hitter and I know how hard it is."

Every Rangers starter except Marcus Semien had at least one hit, and every starter but Charlie Culberson scored at least one run.

"That’s the identity that we have," Woodward said. "We’d love for that to be the identity we have every night. We take a lot of pride in having a 1-9 approach. It’s got to be every guy in the lineup. Not that everybody is going to get a hit or score a run every night, but everybody has got to contribute."

Martin Perez (6-2) was shaky early but settled in, allowing four runs on seven hits in the win. He walked two and struck out six.

"That’s part of the game," Perez said. "I never lost my focus. I knew we were going to score a lot of runs, so I just wanted to keep us in the game. When they scored four runs, I said, ‘Stop it here.’"

Bobby Witt Jr. drove in Whit Merrifield on a fielder’s choice to give the Royals the lead in the first inning. Merrifield and Andrew Benintendi reached on infield singles to open the inning.

The Rangers answered with four in the second, with one of the runs unearned. The Rangers saw their first six batters reach safely. A walk to Nathaniel Lowe forced in the first run, followed by a two-run single by Leody Taveras. The final run scored on a groundout.

The lead didn’t last long as the Royals scored three with two outs in the bottom of the second, tying the score at 4, on Merrifield’s two-run double and Benintendi’s single.

"It was a little frustrating," Woodward said. "Those balls just missed our gloves and were just out of reach. Toward the end of the second inning (Perez) got hit hard. But he does a good job and goes six innings after that. That’s what aces do."

The Rangers got another unearned run in the fourth. Taveras rolled a single up the line and Bubic threw it over Hunter Dozier’s head at first, sending Taveras to second. He went to third on a wild pitch and scored an unearned run on a sacrifice fly.

Garver put the Rangers up by three runs again with a two-run blast in the fifth. He launched a 3-0 pitch into the bullpen in left field.

The Royals traded 1B Carlos Santana and cash considerations to the Seattle Mariners for two pitching prospects. The Royals received RHP Wyatt Mills and RHP William Fleming. Mills was placed on the 40-man roster and was optioned to Triple-A Omaha. Fleming was assigned to High-A Quad Cities. The Royals selected 1B Vinnie Pasquantino from Omaha, who will make his major league debut when he sees his first action. To make room on the 40-man roster, the Royals designated RHP Ronald Bolanos for assignment.