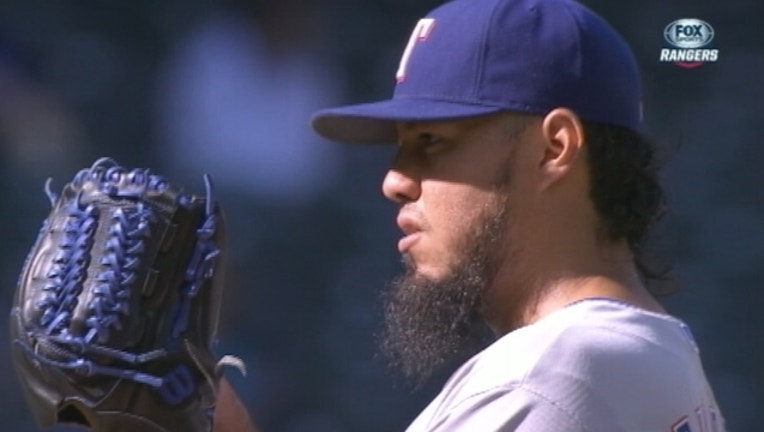 Yovani Gallardo grew up watching the Texas Rangers, often going to their ballpark and dreaming of one day pitching in big games for his local team.

"Even with my cousins, it's one of those things we always talked about, having that goal for myself to put on the Ranger uniform and pitch important games," Gallardo said. "Obviously the one goal that we all have as an athlete, to win the World Series. This is the first step."

"To have this opportunity to start Game 1, it's a big accomplishment," he said.

Gallardo was 10 years old when the Rangers made their playoffs debut in 1996, winning the first of three AL West titles in four seasons.

By time they made their only World Series appearances in 2010 and 2011, Gallardo was pitching for the Brewers. Milwaukee took him in the second round of the 2004 amateur draft out of Trimble Tech High School in Fort Worth, less than 20 miles from the Rangers' ballpark.

The Brewers traded Gallardo to his home team last winter for an infielder and two young pitchers. Gallardo started the opener, which like his first playoff appearance for the AL West champs was on the road.

"I like the body of work, I like the groundball, I like the veteran pitcher in that slot," first-year Rangers manager Jeff Banister said of Gallardo starting the playoff opener. "He's been a guy for us all year that has grinded out innings for us, has kept us in ball games. He's put us some consecutive innings of zeroes also."

Texas was 2-4 this season against the Blue Jays, with Gallardo getting both wins against the AL East champions. Toronto had six hits and hit .136 in 13 2-3 scoreless innings against the right-hander.

Gallardo was 1-2 with a 2.08 ERA in five playoff games for the Brewers. His first was his start in the 2008 NL Division Series opener against Philadelphia and Cole Hamels, the ace left-hander who is now his teammate and the Rangers' scheduled starter for the second game in Toronto.

Hamels pitched eight scoreless innings with nine strikeouts as Philadelphia won that game. The Phillies went on to win the World Series as Hamels was voted MVP.

The last playoff start for both Gallardo and Hamels came in 2011 against St. Louis. Hamels beat the Cardinals in the division series, by Gallardo lost to them in the NL Championship Series. St. Louis went on to beat Texas in a seven-game World Series.

Since throwing 8 1-3 scoreless innings at Toronto on June 27, Gallardo hasn't pitched more than six innings in any of his 17 starts.

"Of course, I want to go nine innings every time out, but yet again, I just understand, they're big games, important games, and we've got a great bullpen," Gallardo said. "They've done a great job throughout the year, especially the second half. ... I feel pretty confident with the guys coming in behind me. They're going to come in and close the door down."