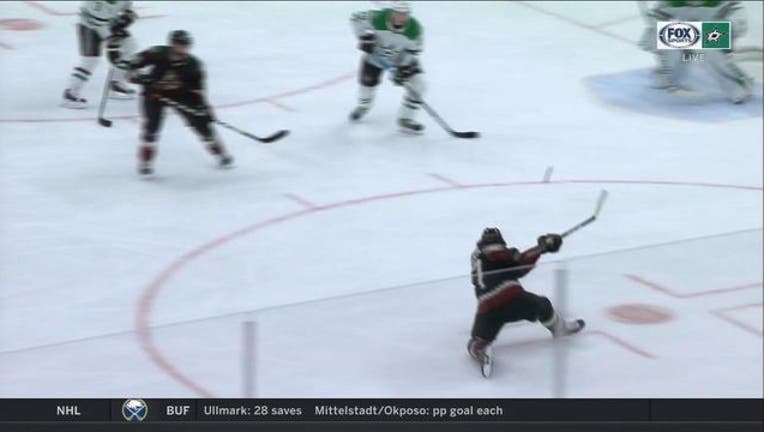 The Coyotes ended a five-game losing streak and kept pace in the race for a Western Conference wild card spot, while the Stars lost for the second time in seven games and ended a six-game points streak.

Arizona also ended a nine-game losing streak overall to the Stars with its first win since March of 2016.

Alex Goligoski also scored for Arizona. His goal came on a power play in the first period, at 8:49, with Galchenyuk earning an assist. Nick Cousins chipped in two assists.

The Stars made it close with two goals in 27 seconds late in the game. Brett Ritchie scored with 3:39 left, and Alexander Radulov made it 3-2 with 3:12 to go when he put in a shot that deflected off a Coyotes defender.

The Stars pulled goaltender Anton Khubodin with a little over a minute left, but the Coyotes held on. Khudobin had 35 saves.

Galchenyuk also scored on a man advantage, at 15:31 of the second. The Coyotes scored two power-play goals in a game for the third time this season.

The Coyotes went ahead 3-0 with Galchenyuk's second goal of the day. Nick Cousins dug a Stars turnover out off the boards behind the net and fed Clayton Keller, whose pass to an open Galchenyuk produced a quick shot past Khudobin at 3:39 of the third period.

Galchenyuk scored his 10th and 11th goals of the season, and he has 14 points in 12 career games against the Stars. Six Coyotes players have 10 or more goals this season, with five players at 11.

NOTES: Newly acquired C Emil Pettersson, who arrived to the Coyotes on Friday in a trade with the Nashville Predators, will report to AHL Tucson. ... F Lawson Crouse was called for boarding in the first period and served a two-minute penalty. He leads Arizona with 60 penalty minutes this season. ... The player Crouse hit, Dallas D Roman Polak, was evaluated for an upper-body injury and didn't return. D Jamie Oleksiak was also shaken up early in the game but returned. ... G Ben Bishop missed his second straight game with an injury but is expected to be ready by Tuesday.

Dallas: At Florida on Tuesday.

Arizona: At Vegas on Tuesday.