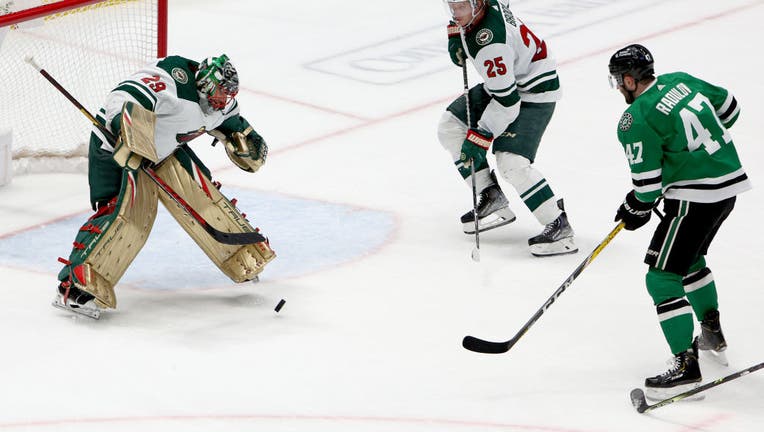 DALLAS, TEXAS - APRIL 14: Marc-Andre Fleury #29 of the Minnesota Wild blocks a shot on goal against Alexander Radulov #47 of the Dallas Stars in the third period at American Airlines Center on April 14, 2022 in Dallas, Texas. (Photo by Tom Pennington

DALLAS - Frederick Gaudreau scored at 1:40 into overtime after assisting on Kevin Fiala's two regulation goals in the Minnesota Wild's 3-2 victory over the Dallas Stars on Thursday night.

Gaudreau took a long pass from goalie Marc-Andre Fleury, skated into the Dallas zone around Jason Robertson and sent the puck past goalie Scott Wedgewood.

"I saw him out of the corner of my eye," Fleury said. "I knew it was my chance. French sense."

Minnesota remained two points behind St. Louis for second place in the Central Division. The Blues won at Buffalo on Thursday night.

Dallas earned a point for the overtime loss, moving the Stars into a tie with Nashville, which lost to Edmonton on Thursday night, for the Western Conference wild-card lead. The Stars and Predators each have eight games remaining.

The Wild have a game in hand going into their game Saturday at St. Louis, where they lost 4-3 in overtime just last Friday night.

Gaudreau said: "They're big games, like playoff games. Everybody's going for the two points. To get two points on the road is great."

"(Fleury) was looking like he was coming to me. If we had kept possession after that, I would have gone off the ice for a line change."

Fiala scored his 27th and 28th goals, including his first short-handed goal. Robertson increased his team-leading total to 36.

Fiala received an assist on Gaudreau's goal for redirecting the puck after Fleury came out of the net.

"I had my foot out and kicked it," Fiala said. "It was lucky.

"It was a great play by Fleury. He sees the ice so well."

Evason said, "He's like a third defenseman. He can still make passes and his puck handling is elite."

Minnesota is 4-1-1 in the last six games, and 5-1 with Fleury in goal since being acquired in a trade March 21 from Chicago.

"He made some great saves," Dallas coach Rick Bowness said. "He's a Stanley Cup champion, a Vezina Trophy winner, a Hall of Famer. Their defense helped him. They stopped two shots when they dove into shots that were going into a wide-open net."

Fiala ended Wedgewood's hope of his second shutout in three nights by putting in a backhand from in front of the net just 2:14 into the game. Gaudreau set up Fiala with a pass from the right corner.

Dallas tied it at 6:02 of the second on the first power play of the game. Robertson took a pass from Roope Hintz in front off the net and shot into Fleury's pads. Robertson gathered the rebound, put the puck on his backhand and slid it into the mostly empty net.

On the Stars' second power play midway through the second, Gaudreau knocked down a loose puck that went to Fiala ahead of Dallas' Alexander Radiulov and John Klingberg. Fiala beat Wedgewood with a wrist shot under the crossbar from short range for his first career short-handed goal.

Robertson tied it 55 seconds into the third period, when his shot from the top of the slot went in off Fleury's stick.

WORTH NOTING: Fiala has been on the ice as a penalty killer longer this season than in his first seven years combined (56 1/2 minutes to 43 1/2). He is having his best overall season, with career highs of 28 goals, 39 assists and 67 points. ... Dallas C Joe Pavelski assisted on Robertson's first goal. It was Pavelski's 47th, breaking a tie for the most in his 16-year career. ... Minnesota had no power plays for the first time since Jan. 14. The Stars' last game without a penalty was Jan. 24.

Wild: At St. Louis on Saturday.