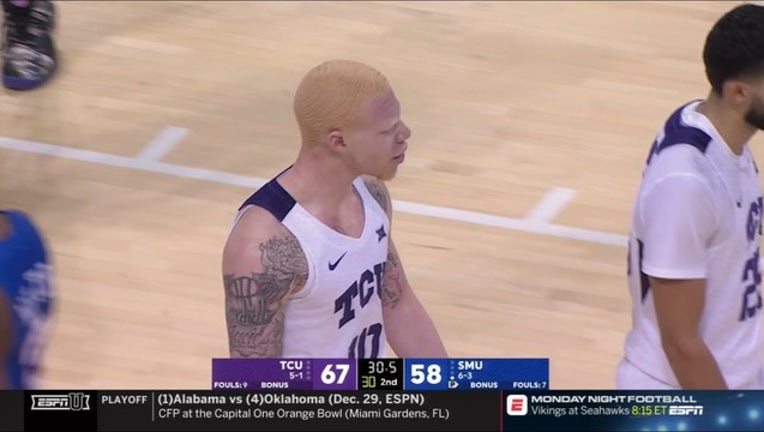 DALLAS (AP) - Jaylen Fisher scored 12 of his 15 points after halftime as TCU rallied for a 67-59 win at SMU on Wednesday night, ending the Mustangs' four-game winning streak.

Fisher's third 3-pointer of the second half made it 49-47 with 10 ½ minutes left, putting the Horned Frogs (6-1) ahead to stay. He hit from the right corner on a pass from Kouat Noi, who then hit a 3 of his own on the next TCU possession. Fisher scored all of his points with five 3-pointers overall.

JD Miller also had 15 points for TCU, while Noi finished with 12.

SMU missed its first eight field goal attempts after halftime, but still had a 41-37 lead when Hunt drove for a layup to make it 41-37 with 13:27 left. TCU's only two made baskets in the half until that point were a pair of 3s by Fisher.

Soon after that TCU was in the lead for the first time since early in the game. Desmond Bane hit a 3-pointer from the left corner in front of the Frogs bench, then rebounded a missed Mustangs shot that led to his fast-break layup for a 42-41 lead.

The Mustangs had 10-point leads three different times in the first half. After their latest double-digit lead, TCU scored six in a row to cut it to 33-29 just before halftime when Alex Robinson had a layup, made a free throw and Fisher hit his first 3 of the game.

TCU: The Horned Frogs survived their first road game this season, though they only had to travel about 40 miles to get from their Fort Worth campus to Moody Coliseum. Alex Robinson came in as the national leader in assists at 9.3 and TCU was the best team at 22.2 per game. Robinson had seven of the Frogs' 16 assists on their 25 made field goals.

SMU: Like TCU, the Mustangs lost at home to Lipscomb and were coming off an eight-point win over Oral Roberts, who the Frogs beat by 10 earlier this season. After shooting 50 percent (14 of 28) from the field before halftime, SMU shot 24 percent after the break (8 of 33), including 1-of-14 on 3-pointers.

There was a moment of silence before the game for the late President George H.W. Bush. The 41st president's son, George W. Bush, attends several SMU basketball games each season. The younger Bush's presidential library is across the street from Moody Coliseum on the edge of the SMU campus.

TCU goes to the area where coach Jamie Dixon grew up when the Horned Frogs play Southern Cal at the Staples Center in Los Angeles on Friday night as part of the Basketball Hall of Fame Classic. Dixon's parents still live in the same North Hollywood home where he grew up.

SMU gets an extended break for final exams. The Mustangs don't play again until Dec. 15 at Georgetown.