Father, son to face off in state championship

A famous Texas high school family is divided over a state championship game that happens this weekend.

SOUTHLAKE, Texas - A football family will be put to the test as father and son coaches face off with a state high school championship on the line.

Riley and Todd Dodge said they don’t think this kind of matchup has ever happened before in a Texas state championship football game.

There’s a tremendous bond between the two. But make no mistake, they’re both playing to win.

Riley Dodge is the head coach of the Southlake Carroll Dragons.

Saturday night in AT&T Stadium, his team will take on Austin Westlake High coached by his dad Todd Dodge.

There’s some remarkable history behind the game.

Back in 2006, Todd Dodge was the head coach at Southlake and son Riley was the quarterback for the Dragons. They won a state title by defeating Westlake.

Father and son spoke on the phone this past weekend, cordially of course, mostly as opposing coaches to agree on an officiating crew.

"I don’t think I’ve ever told the coach I’m going to play next week I love him when I get off the phone," Todd Dodge said. 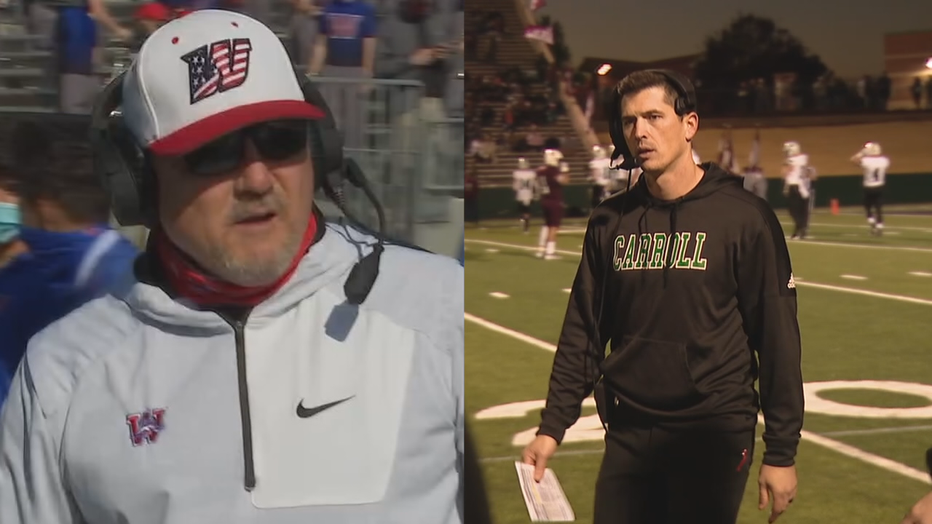 Elizabeth Dodge, Riley’s mom and Todd’s wife, said she feels blessed by the whole unusual scenario and just hopes both teams play really well and that the best team wins.

"And so, it’s going to be hard for me because I don’t think I’m gonna let down the whole game. Whoever’s on the field, I’m going to be yelling for which is a little crazy," she said.

Southlake and Westlake were supposed to meet up in the first game of this season but that game was canceled due to the coronavirus.

Little did anyone know how the unusual season would play out and what fate had in store for the Dodge family.

Kickoff for Saturday’s 6A Division 1 state championship game is set for 7 p.m. at AT&T Stadium.