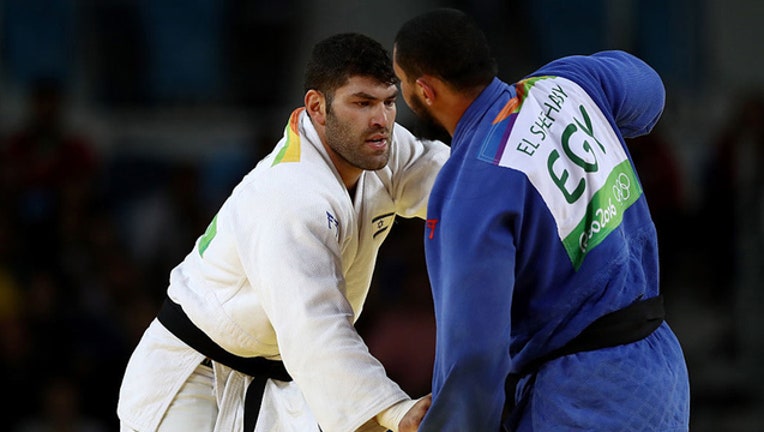 RIO DE JANEIRO, BRAZIL - AUGUST 12: Or Sasson of Israel (white) competes against Islam El Shehaby of Egypt in the Men's +100 kg Elimination Round of 32 on Day 7 of the Rio 2016 Olympic Games. (Photo by Elsa/Getty Images)

RIO DE JANEIRO (AP) — An Egyptian athlete who refused to shake his Israeli opponent's hand after their judo bout has been reprimanded and sent home from the Rio Olympics, officials said Monday.

The International Olympic Committee said Islam El Shehaby received a "severe reprimand" for his behavior following his first-round heavyweight bout loss to Or Sasson on Friday.

When Sasson extended his hand, El Shehaby backed away and shook his head, injecting Middle Eastern politics into the Rio Olympics. The referee called the 34-year-old El Shehaby back to the mat and obliged to him to bow; he gave a quick nod and was loudly booed as he exited.

Judo opponents typically bow or shake hands at the beginning and end of a match as a sign of respect.

El Shehaby, an ultraconservative Salafi Muslim, had come under pressure from Islamist-leaning and nationalist voices in Egypt before the Rio Games to withdraw, but competed anyway.

The IOC, which set up a disciplinary commission to investigate the incident, said the Egyptian's conduct "was contrary to the rules of fair play and against the spirit of friendship embodied in the Olympic values."

The IOC also asked the Egyptian committee to make sure that all its athletes "receive proper education on the Olympic values before coming to the Olympic Games."

Immediately after the bout, the Egyptian Olympic committee had called it a "personal action" by El Shehaby, adding that he had been "alerted before the match to abide by all the rules and to have sporting spirit during his match with the Israeli player."

Sasson, who lost in the semifinals but later won a bronze medal, had said he was not surprised by El Shehaby's actions because his coaches had warned him he might be refused a handshake. "This was his decision," he said.

Similar incidents have happened before at judo competitions between Israelis and Arabs.

Egypt was the first country in the Arab world to sign a peace treaty and normalize relations with Israel after decades of war.