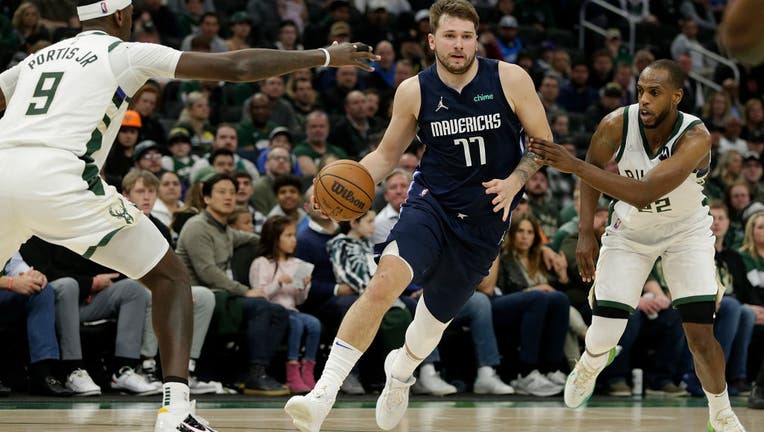 MILWAUKEE, WISCONSIN - APRIL 03: Luka Doncic #77 of the Dallas Mavericks drives to the basket past Khris Middleton #22 of the Milwaukee Bucks during the second half of a game at Fiserv Forum on April 03, 2022 in Milwaukee, Wisconsin. NOTE TO USER: Us

Giannis Antetokounmpo led the Bucks with 28 points and 10 assists. Milwaukee was essentially at full strength Sunday after resting all of its usual starters in a 153-119 loss to the Los Angeles Clippers on Friday night.

Doncic flirted with a triple-double before finishing with eight rebounds. In six career games against the Bucks, Doncic has averaged 26.8 points, 11.3 assists and 9.2 rebounds with three triple-doubles.

Dallas' Dwight Powell added 22 points and 13 rebounds -- one off his career high.

After a basket by Bobby Portis briefly gave the Bucks a one-point lead early in the fourth, Doncic led the Mavericks back by scoring or assisting on each of Dallas' first 11 points in the final period.

Antetokounmpo made two free throws to cut the margin to five, but Doncic found Reggie Bullock for a corner 3-pointer that extended Dallas' lead to 101-93 with 6:55 remaining.

The Bucks made one final charge.

Jrue Holiday sank a 3-pointer to cut the Mavericks' lead to 101-98 midway through the fourth quarter. Powell responded by converting a conventional three-point play to make it 104-98 with 5:52 remaining.

The margin didn't drop below five the rest of the way.

Bullock had 16 points, Jalen Brunson 15 and Dorian Finney-Smith and Spencer Dinwiddie 11 each for the Mavericks. Jrue Holiday had 20, Portis 17, Brook Lopez 14, Pat Connaughton 12 and Khris Middleton 11 for the Bucks.

Mavericks: Forward/center Maxi Kleber didn't play due to a sore right ankle. ... Mavericks coach Jason Kidd congratulated former Dallas coach Del Harris for his selection to the Naismith Memorial Hall of Fame on Saturday, but said it's about time another former Mavericks coach gets honored as well. "We're all excited for him and his family because he should have been in there a long time ago," Kidd said before the game. "The next guy we have to try to get in is Dick Motta. He should be in, too, a coach that maybe didn't do the politic thing, but he came to work every day and so he's the one that should be in the Hall of Fame next. Hopefully we can get him in."

Mavericks: At Detroit on Wednesday. The Mavericks will be completing a four-game trip before finishing the regular season with two home games.

Bucks: At Chicago on Tuesday. The Bucks are 3-0 against the Bulls and will be trying to complete a regular-season sweep of the series.