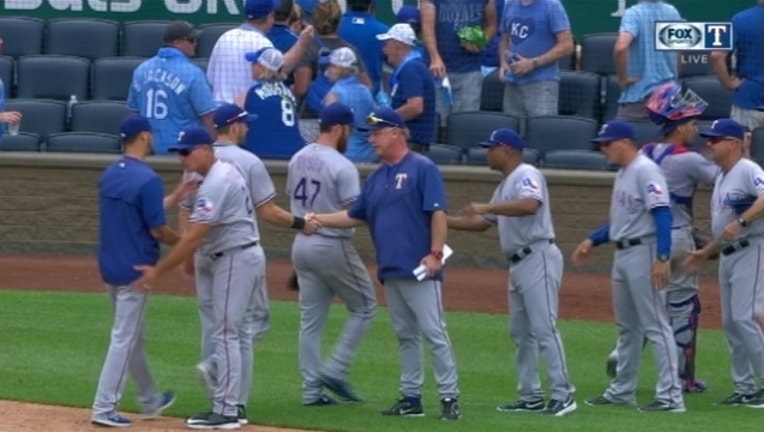 KANSAS CITY, Mo. (AP) — Delino DeShields homered in the seventh to break a tie and the Texas Rangers defeated the Kansas City Royals 2-1 on Sunday.

DeShields, who was recalled Thursday from Triple-A Round Rock, walked and doubled before leading off the seventh with his third home run. DeShields hit a 2-1 pitch from Luke Hochevar out to left.

Dyson earned his 20th save in 22 opportunities, but not before allowing two singles and taking Paulo Orlando's liner off his right shoulder.

After stranding runners at third base in the third, fourth and fifth innings, the Rangers broke through with a clutch hit in the sixth when Mitch Moreland's two-out single scored Adrian Beltre, who began the inning with a single.

Royals starter Edinson Volquez left after six innings and 91 pitches, allowing one run and seven hits, while walking three and striking out three. It was Volquez's fifth straight start pitching at least six innings and he has a 2.87 ERA in that span.

There were scouts watching Volquez, who is eligible for free agency after this season and could be traded at the deadline.

C Salvador Perez was not in the Royals lineup for the first time since July 3 with Drew Butera behind the plate with a day game after a night game. Perez is in a 2-for-23 skid with eight strikeouts and no walks over six games.

The Rangers wrapped up a nine-game, 10-day trip Sunday and play their next seven at Globe Life Park. They have played only four home games in the past 28 days from June 27 to July 24.

Left-hander Craig Breslow, who was released Monday by the Marlins, has signed a minor league contract with the Rangers and assigned to Triple-A Round Rock. Breslow, 35, is 22-29 with a 3.35 ERA in 539 games in the majors with San Diego, Boston, Cleveland, Minnesota, Oakland, Arizona and Miami.

Rangers: General manager Jon Daniels said he anticipates LHP Derek Holland and RHP Colby Lewis will return to the rotation on Aug. 20 and 21, the dates they are eligible to come off the 60-day disabled list.

Rangers: LHP Martin Perez, who has lost his past three starts, will start against the Athletics at Arlington.

Royals: RHP Ian Kennedy, who starts the series opener against the Angels, allowed four home runs in a Wednesday loss to the Indians and is tied with teammate Chris Young in allowing a major league-high 26 homers.