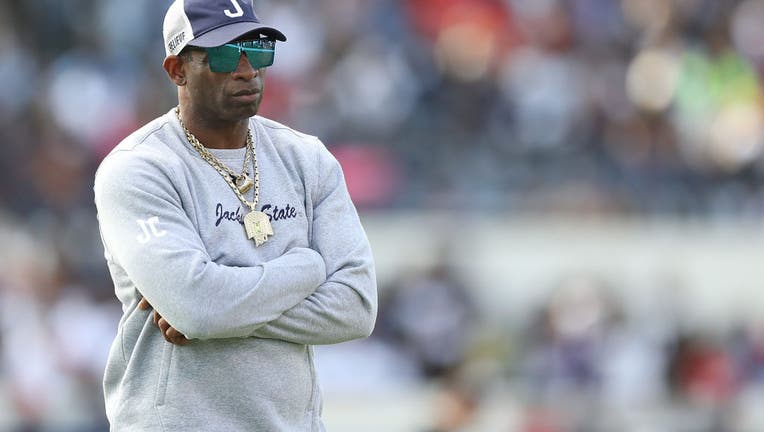 JACKSON, MISSISSIPPI - DECEMBER 03: Head coach Deion Sanders of the Jackson State Tigers looks on before the game against the Southern University Jaguars in the SWAC Championship at Mississippi Veterans Memorial Stadium on December 03, 2022 in Jackso

BOULDER, Colo. (AP) — Deion Sanders is taking over as head coach at Colorado, bringing his charisma and larger-than-life persona to a beleaguered Pac-12 program that’s plunged to the bottom of college football.

The Pro Football Hall of Famer has been at Jackson State, a historically Black college that plays in the NCAA’s second tier of Division I, since 2020. Sanders has guided the Tigers to consecutive Southwestern Athletic Conference titles.

The Tigers beat Southern in the SWAC championship game Saturday in Jackson, Mississippi, and a few hours later Colorado announced he was coming to Boulder.

Sanders told his team after the game he had accepted another job, but intended to coach Jackson State (12-0) in the Celebration Bowl for historically Black colleges on Dec. 17 in Atlanta against Mid-Eastern Athletic Conference champion North Carolina Central.

"In coaching you either get elevated or you get terminated," Sanders told his team. "There ain’t no graveyard for coaches where they die at the place. They either going to run you off or you going to walk off."

Sanders talked about the dearth of Black head coaches at the highest levels of college football and trying to be a catalyst for change.

"It’s not about a bag," Sanders said. "It’s about an opportunity."

The Tigers went 27-5 in the Sanders era and he was named SWAC coach of the year the last two seasons.

Known as "Prime Time" during his high-stepping, play-making NFL career, the 55-year-old Sanders prefers "Coach Prime" these days. Colorado will prove a challenge for the magnetic Sanders, who inherits a program coming off a 1-11 season. But he brings instant name recognition and a track record of being able to recruit top-level talent.

"There were a number of highly qualified and impressive candidates interested in becoming the next head football coach at Colorado, but none of them had the pedigree, the knowledge and the ability to connect with student-athletes like Deion Sanders," George said in a statement. "Not only will Coach Prime energize our fanbase, I’m confident that he will lead our program back to national prominence while leading a team of high quality and high character."

The Buffaloes have turned in just one full-length winning season since joining the Pac-12 in 2011. They dismissed Karl Dorrell in October and interim coach Mike Sanford finished out the season that culminated with a 63-21 blowout loss to No. 12 Utah at home.

Colorado is a long way from its glory days under Hall of Fame coach Bill McCartney, who led the Buffaloes to a national championship following the 1990 season.

While the program is trying to build up its name, image and likeness portfolio, establishing the Buffs4Life Foundation to help out student-athletes, Colorado also has seen several players announce their intention in recent days of entering the transfer portal.

Sanders figures to bring a few players along with him — possibly even his son, quarterback Shedeur Sanders, a 6-foot-2 sophomore at Jackson State who’s thrown 36 TD passes this season and just six interceptions.

Deion Sanders was an All-American at Florida State before a standout NFL career with five teams, including the San Francisco 49ers and Dallas Cowboys, where he won a Super Bowl with each. He also played nine MLB seasons and reached the World Series with the Atlanta Braves in 1992.

Over the years, Sanders was an analyst and a star of reality TV shows and commercials, including Aflac spots with Alabama coach Nick Saban.

Jackson State hired Sanders in September 2020 after he coached his sons at a fledgling Texas high school that was fraught with issues.

Moving to Jackson State, Sanders called the fit "a match made in heaven," and quickly lifted the school in Mississippi’s capital.

The success of Jackson State was significant as it made a program that has produced Hall of Famers such as Walter Payton, Lem Barney, Jackie Slater and Robert Brazile relevant again among HBCUs, and Sanders was determined to keep it that way.

The arrival of Sanders raised Jackson State’s visibility. They were on the cover of Sports Illustrated in July — a feature on how Sanders rebuilt the program — and saw ESPN’s "College GameDay" pay a visit to Jackson State in October. Sanders also appeared on "60 Minutes" in a profile story.

Jackson State athletic director Ashley Robinson said in a statement Sanders "challenged norms and transformed mindsets of what was perceived to be possible to create new visions for success while inspiring the community and creating a spotlight on the HBCU sports and culture."

Sanders told the team he was recommending to Robinson and the Jackson State administration that receivers coach T.C. Taylor be the next head coach.

Sanders has scored big on the recruiting trail, landing five-star defensive back Travis Hunter and four-star receiver Kevin Coleman for this year’s squad. Sanders told The Associated Press in an October podcast that both players chose JSU because he and his staff will prepare them for careers in the NFL.

"Deion Sanders’ stature transcends sports, and his hiring elevates not only the football program but the university as a whole," CU Boulder Chancellor Philip DiStefano said. "This is an exciting new chapter in the long, storied history of Colorado football and I look forward to standing shoulder-to-shoulder with our students, supporters and fans to cheer on ‘Coach Prime’ and our student-athletes next fall."