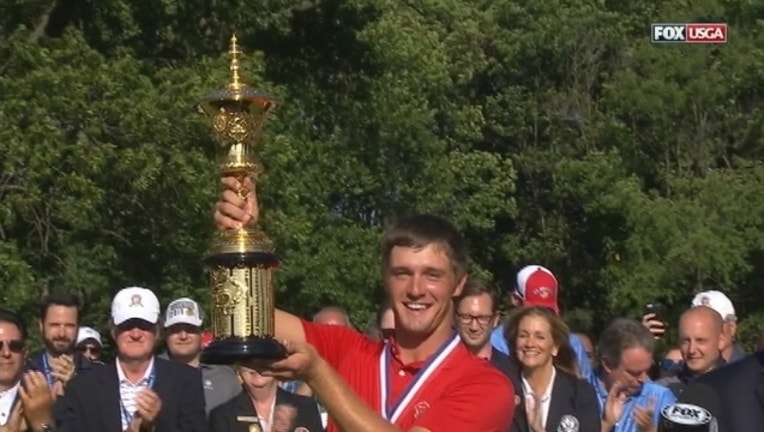 DALLAS (AP) — U.S. Amateur champion Bryson DeChambeau has left SMU after the NCAA imposed penalties against the men's golf team that would keep him from defending his NCAA individual title next summer.

SMU officials confirmed Wednesday that the senior was no longer on the team.

DeChambeau revealed his decision in a statement to Golf Channel, though he never mentioned sanctions the NCAA announced last month against the SMU men's golf and men's basketball teams.

"To best prepare myself for the next six months of competition and future events, I felt it was appropriate to make this decision now to be fair to my coaches and team," DeChambeau said.

The school is appealing several sanctions, including a penalty applied to men's golf that resulted in a postseason ban for the team and for individual competition. But that appeals process could take weeks or months.

DeChambeau last summer joined Jack Nicklaus, Phil Mickelson, Tiger Woods and Ryan Moore as the only players to win the U.S. Amateur and NCAA individual titles in the same year.

The U.S. Amateur title made the 22-year-old golfer exempt to get into the first three majors of 2016, the Masters, the U.S. Open and the British Open.

Late in the summer, DeChambeau had talked about his plans to stay in school to finish his physics degree and play his final season with the Mustangs.

According to Golf Channel, DeChambeau plans to play the Argentina Open and Australian Open in November, and is expected to turn pro after the Masters.