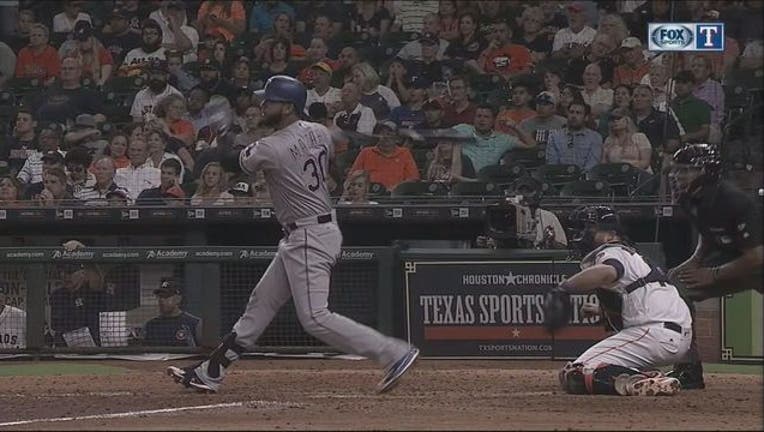 HOUSTON (AP) - Yu Darvish was determined to pitch better Monday night after struggling in his last outing against the Houston Astros.

The right-hander was able to do that, pitching seven solid innings to help the Texas Rangers beat their in-state rival 6-1.

Darvish (6-4) allowed a season-low one hit with one run and three walks. He induced a season-best 12 groundball outs. This start came after he tied a season-worst by allowing seven hits with three runs in just five innings in a 7-1 loss to Houston on June 2.

"It was a great night for Yu," Texas manager Jeff Banister said. "His sinker played very well to both sides of the plate. He was able to run the four-seam up and down to left-handers. Curveball showed up big for him early; didn't break out the slider until the sixth, which allowed him to get some late outs."

Darvish said his sinker was the key to his success Monday.

"I usually stay with my strength and I go with my stuff, what I've got on the day," he said through a translator. "But (after) that previous outing ... I just studied hard on each hitter and what their tendencies are and I went at it today."

The Rangers went up 2-0 on back-to-back triples by Rougned Odor and Joey Gallo in the third inning.

The Astros got an RBI single by Alex Bregman in the fifth, but a run-scoring double by Adrian Beltre gave the Rangers some insurance in the sixth inning.

Nomar Mazara provided more cushion with his three-run shot to straightaway center field off Dayan Diaz with two outs in the eighth to make it 6-1.

Houston starter Joe Musgrove (4-5) allowed five hits and two runs in 4 2/3 innings in his return from the disabled list. Musgrove had been out since May 26 with shoulder discomfort.

"He was good," manager A.J. Hinch said. "We were very cautious with his pitch count, obviously. Seventy five was as high as we wanted to go, so I went out to get him."

Jonathan Lucroy singled with two outs in the second inning and scored on the triple by Odor to put Texas up 1-0. Gallo followed with his triple to score Odor, but was tagged out at home to end the inning.

Right fielder Josh Reddick crashed into the wall trying to make a catch on the ball hit by Gallo and was taken out of the game to start the fourth inning. He was diagnosed with a mild concussion.

Darvish kept the Astros off-balance all night. He retired the first seven before walking Bregman with one out in the third. Nori Aoki grounded into a force out that left Bregman out at second before Darvish retired George Springer to end that inning.

Carlos Beltran drew a walk to start the fifth, before the RBI single by Bregman which cut the lead to 2-1 with two outs in the inning. Bregman's hit sailed into shallow left field, and Mazara charged in but was unable to make the catch.

Rangers: CF Carlos Gomez (right hamstring) is nearing a rehab assignment and will likely play three games in the minors before he returns to the team.

Astros: RHP Lance McCullers was placed on the 10-day disabled list retroactive to June 9 with discomfort in his lower back. The move leaves Houston with four starting pitchers on the DL as ace Dallas Keuchel and Charlie Morton are on the 10-day DL and Collin McHugh is on the 60-day DL. The Astros don't think the injury to McCullers is serious and expect him to return as soon as the 10 days are up.

The Astros honored Aoki a day after he surpassed the 2,000-hit mark between the American and Japanese major leagues. The milestone earned him automatic entrance into Meikyukai - also known as The Golden Players Club - one of two Japanese baseball halls of fame.

Aoki was presented with a black cowboy hat and a shadow box commemorating his milestone in a pregame ceremony.

The Astros failed to hit a home run on Monday to snap their franchise-record 19-game streak with at least one home run.

Rangers: Texas will start Nick Martinez (1-3, 4.88) on Tuesday. Martinez allowed one hit in 3 1/3 scoreless innings of relief in his last outing.

Astros: Brad Peacock (3-1, 3.15) will start on Tuesday on three days' rest in place of McCullers. Peacock exited his last start after just three innings after allowing seven hits, four walks and four runs in a 9-4 loss to the Angels on Friday.