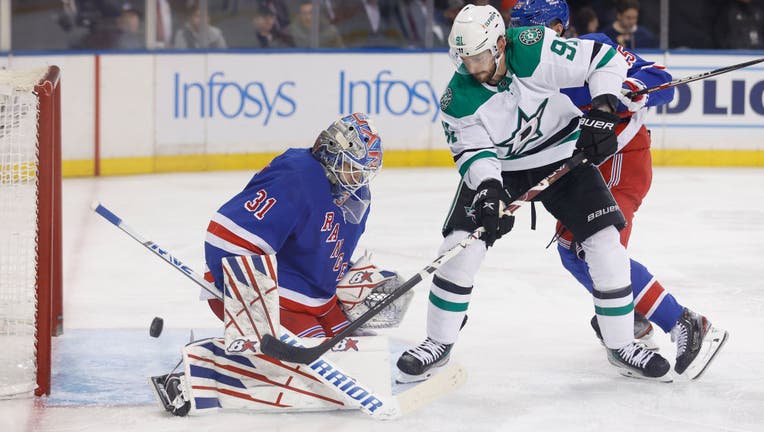 NEW YORK, NEW YORK - JANUARY 12: Igor Shesterkin #31 of the New York Rangers blocks a shot against the Dallas Stars during the 2nd period at Madison Square Garden on January 12, 2023 in New York City. (Photo by Josh Lobel/NHLI via Getty Images)

Jake Oettinger was tenths of a second from the shutout — and the Rangers hadn’t even managed a shot on goal with an extra skater on the ice — before Miller’s shot made it through for his fifth of the season. Miller has points in five straight games.

"It was a scrum in front of the net and the puck just came to me,'' Miller said, "I was coming down Main Street and just tried to get a puck on net. We had a good amount of scoring chances. It was just a matter of time before one went in."

Igor Shesterkin made 24 saves for New York, allowing only Tyler Seguin's power-play goal late in the second period. Shesterkin won for the 20th time this season.

After three failed power-play chances by the Rangers in the middle period, Seguin converted at 17:53 by firing his 10th goal past Shesterkin. Mason Marchment and Denis Gurianov had assists. The 30-year-old Seguin has 28 points overall.

Oettinger finished with 29 saves but was frustrated with the finish, even though the Stars kept an opponent to two or fewer goals for the eighth time in nine games.

"I'm probably going to think about this for a while,'' Oettinger said. "You're less than a second away. It's brutal. The guys played their hearts out."

Coming off a 4-3 shootout victory over Minnesota on Tuesday night, the Rangers are 13-2-2 in their last 17 games and have won have seven of their last eight games at home.

Rangers coach Gerard Gallant was especially pleased with the finish and the play of the 22-year-old Miller, a first-round draft pick by the Rangers in 2018 who is excelling in his third season with the team.

"To come back like that was pretty exciting,″ Gallant said. "K'Andre has been good for us the whole year. That was huge for him and huge for our team."

Dallas beat the New York Islanders on Tuesday in a shootout and the speedy Stars had stymied the Rangers throughout the contest, particularly during six minutes when New York had a man-advantage in the second. The Rangers had a fourth power-play chance in the third when Oettinger was called for delay of game when his mask came off after a shot struck the netminder’s face protection.

"I thought we played a much game tonight than we did on the Island. I liked our game tonight,'' Stars coach Pete DeBoer said. "Sometimes the hockey gods even things out."

Fox said the improbable victory over the first-place Stars was particularly satisfying considering the Rangers are in a tight division battle of their own. The Rangers are also 10-0-0 when Fox records two or more points.

"Our division is tight. To get two points these last two games is big,'' said Fox, who assisted on Miller's goal and has points in six straight games. "We battled to the end."

NOTES: Miller's goal marked the fourth time in Rangers history they tied a game at 19:59 of the third period. Brian Leetch (Dec. 1, 1998), Darren Turcotte (Feb. 17, 1992) and Doug Robinson (Feb. 21, 1965) were the other three ... The Rangers are 9-3-1 against Central Division teams and 13-5-3 against Western Conference opponents overall … The Stars scratched injured forward Roope Hintz and defenseman Joel Hanley…. The Rangers scratched forward Chris Kreider (injured Tuesday against Minnesota), defenseman Libor Hajek and forward Jake Leschyshyn, who was claimed on waivers from Vegas on Wednesday.