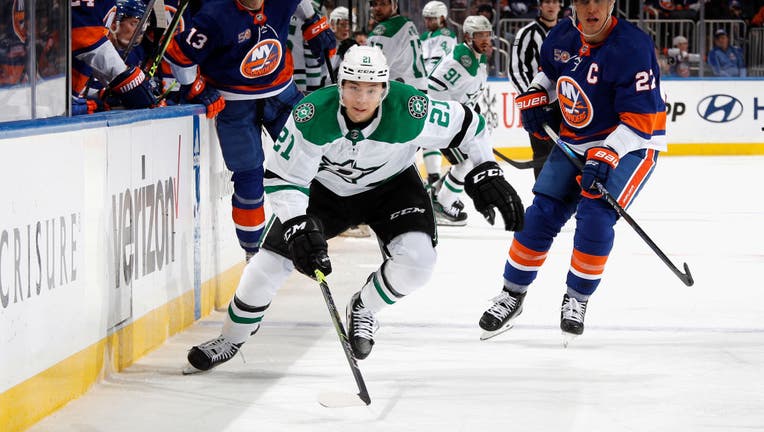 NEW YORK (AP) - Jason Robertson scored in regulation and picked up the only goal in the shootout to give the Dallas Stars a 2-1 win over the New York Islanders on Tuesday night.

Robertson wired a wrist shot over the glove of Sorokin in the shootout. Dallas' Jake Oettinger made 26 saves and stopped Mathew Barzal, Anthony Beauvillier and Brock Nelson in the shootout.

Anders Lee scored the lone goal for New York and Ilya Sorokin finished with 23 saves in the first of a five-game Islanders homestand.

"We knew it was going to be a tight game, obviously they have a great goalie," Oettinger said, referring to Sorokin. "He’s not going to give up any easy ones."

Oettinger made multiple key saves in the first half of the third period, including a a breakaway attempt, an odd-man rush opportunity and a long-range wrister.

"He was awesome tonight," Stars coach Peter DeBoer said of Oettinger. "You kind of get used to the level he plays at, he was exceptional. We are probably down 3-0 at the end of the first if he’s not back there. … He was by far our best player."

Robertson notched his 29th goal of the season to open the scoring at 3:42 in the first. Tyler Seguin and Joe Pavelski each connected on a cross-ice pass before Robertson slid the puck past Sorokin.

"It kind of mirrors our game," Robertson said of the Islanders' system. "We do score a lot of goals but we are also a team that shuts it down and limits chances."

The Islanders knotted the score when Lee converted on the power play at 13:39 in the first, set up by Brock Nelson at the edge of the crease for an easy tap-in goal. Defenseman Noah Dobson also assisted on the equalizer. New York had scored only two goals on the man advantage in the previous 36 attempts.

"I thought we played a better game than the last few we had," Nelson said. "I thought we were a bit more on our toes, aggressive, keeping plays alive and had quite a few good looks. We’d like to be leaving this with two points."

Barzal returned to the lineup after missing the previous game against the Calgary Flames with a lower-body injury. He leads the team in assists (30) and points (41). … Forward Simon Holmstrom also returned to the Islanders lineup after being sidelined for the previous six games with a lower-body injury. … Stars forward Roope Hintz did not travel to New York with the team due to an upper-body injury; Seguin centered Dallas’ top line playing alongside Robertson and Pavelski . … Forward Denis Gurianov rejoined the Stars and played for the first time since taking a team-excused leave for unspecified family reasons that lasted nine games.

FAMILY OF FOUR THE MILLIONTH FAN

The Islanders welcomed their one millionth fan to UBS Arena on Tuesday and surprised them with a celebration at the main entrance of the venue, which opened last season. A family of four from Islip, New York, was awarded several gifts from the organization — including upgraded seats in the owners’ suite, 1,000 MegaMillions tickets and a shopping spree at the Islanders' team store. Islanders co-owner Jon Ledecky also greeted the winning fans.