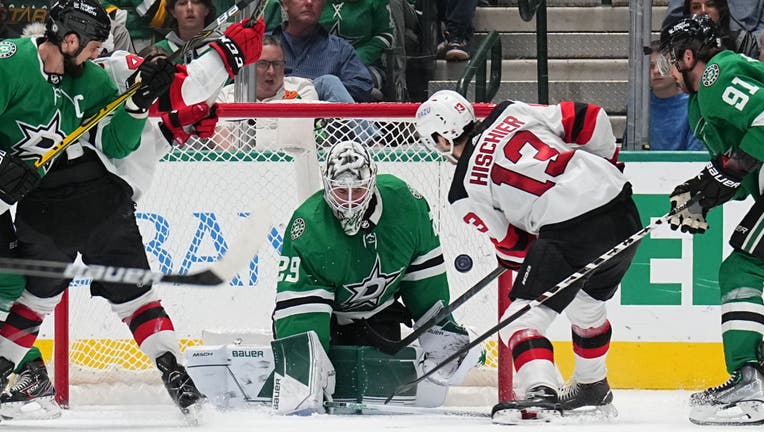 DALLAS, TX - APRIL 9: Nico Hischier #13 of the New Jersey Devils scores a goal against Jake Oettinger #29 of the Dallas Stars at the American Airlines Center on April 9, 2022 in Dallas, Texas. (Photo by Glenn James/NHLI via Getty Images)

Ty Smith also scored in the third for New Jersey, which had dropped five in a row. Fabian Zetterlund had two assists, and Nico Daws made 27 saves.

Dallas defenseman Ryan Suter scored his 100th career goal 13:31 into the second. Jake Oettinger made 20 stops, but the Stars (40-27-4) missed out on a chance to strengthen their playoff positioning in the Western Conference.

Smith tied it at 1 when he converted a wrist shot from the top of the right circle at 4:26. It was Smith's fifth goal of the season.

Hischier put New Jersey ahead to stay with 1:11 left. He skated past the goal to the right, and then stepped back across to beat Oettinger for his 20th goal this season.

After the faceoff, Zacha skated into the left faceoff circle and sent the puck into the net. It was Zacha's 14th on the season.

The Stars had taken the lead on Suter's seventh of the year, stopping a 0-for-13 drought on the power play. Suter scored with a wrist shot from the top of the left circle.

Hischier matched his career high of 20 goals from his rookie season of 2017-18. He also has a career-high 34 assists and 54 points.

Devils: Play the second in a five-game Western trip on Tuesday at Arizona.

Stars: Complete back-to-back games with and in-and-out trip to Chicago on Sunday.