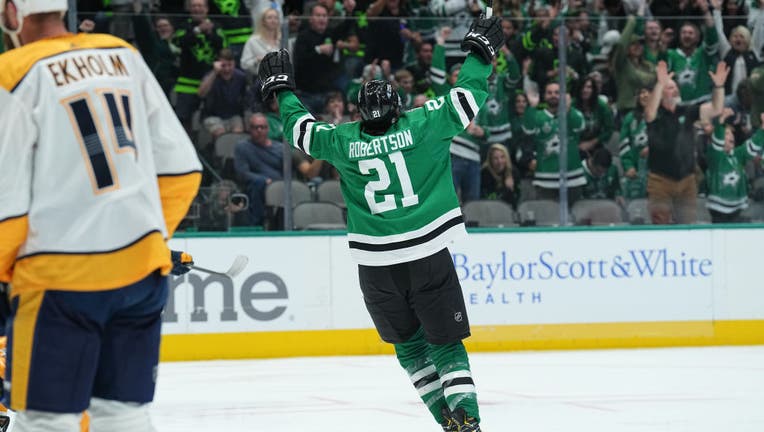 DALLAS, TX - OCTOBER 15: Jason Robertson #21 of the Dallas Stars celebrates a goal against the Nashville Predators at the American Airlines Center on October 15, 2022 in Dallas, Texas. (Photo by Glenn James/NHLI via Getty Images)

DALLAS (AP) - Roope Hintz scored twice, Jason Robertson had a goal and two assists and the Dallas Stars finished a home-and-home sweep of the Nashville Predators with a 5-1 victory Saturday night.

Jake Oettinger made 29 saves as the Stars won their home opener two nights after the young standout goalie stopped 30 shots in a 4-1 victory that spoiled the Predators' first game of the season in Nashville.

Nino Niederreiter scored his fourth goal in four games for the Predators, who started the season with a pair of wins over San Jose in Prague.

Standout defenseman Miro Heiskanen had a goal and an assist, and Joe Pavelski added two assists for Dallas.

Mason Marchment added an empty-netter to give the free-agent pickup three goals in two games as first-year Dallas coach Pete DeBoer made his home debut.

"I think when you’re a new coach coming in, you’re throwing a lot of different things at them," DeBoer said. "It’s not that we don’t have buy-in. I thought we had it right from day one. But it’s nice to reinforce it with wins."

Hintz opened the scoring with a short-handed goal when he came off the bench and poked the puck away from Roman Josi from behind. Heiskanen ended up with it and chipped a pass to Hintz for the breakaway.

Dallas went up 2-0 early in the second when Hintz’s pass across the crease deflected off defenseman Mattias Eckholm’s glove and went between the legs of Juuse Saros, who stopped 17 of 21 shots.

The Stars took advantage of a 4-on-4 for a 3-0 lead when Heiskanen skated free up open ice on the left side and passed to Robertson before taking a pass back near the net for a one-timer.

Robertson assisted on Hintz's second goal before the give-and-go with Heiskanen, then got his first goal for a 4-1 lead on a one-timer from the slot on a pass from Hintz.

The 23-year-old Robertson has four points in two games since signing a $31 million, four-year contract a week before the season started. The talks kept him out almost all of training camp.

Robertson's 41 goals last season made him just the fourth 40-goal scorer for Dallas since the club moved south in 1993-94. It hasn't taken long to get going again with fellow top-liners Pavelski and Hintz.

"I didn't know whether it would take a game or a shift or go weeks to get back to it," Robertson said. "It's great that we were able to connect, in the last game, too. Because when you start feeling it, then you get more confident."

Niederreiter scored just as a 5-on-3 advantage was ending in the second period. He tipped a pass from Mikael Granlund past Oettinger.

The Predators didn't convert on their other three power plays exactly a week after the second of two victories in Europe before returning to the U.S. in a whirlwind start to the season.

"We knew that it’s not going to be easy," Niederreiter said. "But we’ve got to demand more from each other. Doesn’t matter how hard it is. We’ve got to push each other and we still can be able to play hard and do the little things right. I think that’s something that we haven’t done."

NEAR MISS, AND MISCONDUCT

Nashville's Matt Duchene beat Oettinger but hit the post with a shot in transition when the Predators were still scoreless in the second period. Soon after, he was penalized for hooking and given a 10-minute misconduct.

Less than a minute after Hintz's second goal, Dallas' Denis Gurianov sent a puck toward the net, and it appeared to go in. But officials were on top of it, immediately waving it off. The puck actually went under the bottom of the net when it was briefly dislodged.

Stars: Rick Bowness, coach in Dallas the previous two-plus seasons but now in charge in Winnipeg, visits Monday with the Jets.