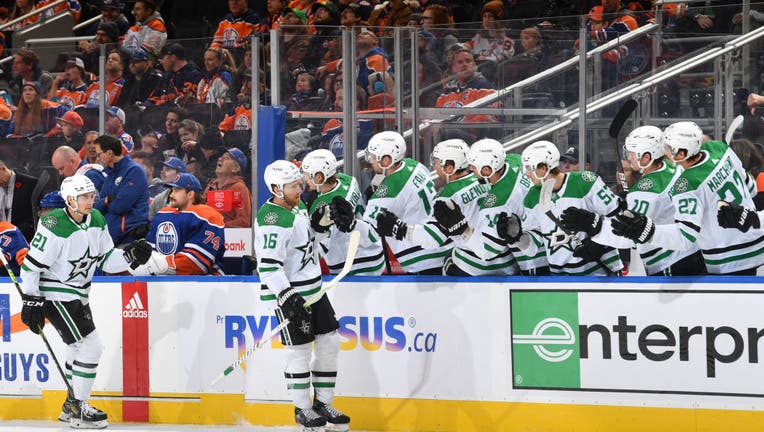 EDMONTON, CANADA - NOVEMBER 05: Joe Pavelski #16 of the Dallas Stars celebrates his second period against the Edmonton Oilers during the game on November 05, 2022 at Rogers Place in Edmonton, Alberta, Canada. (Photo by Andy Devlin/NHLI via Getty Imag

EDMONTON, Alberta (AP) - Jamie Benn scored three goals for his seventh career hat trick and Jason Robertson had a goal and two assists as the Dallas Stars rolled to a 6-2 win over the Edmonton Oilers on Saturday.

Joe Pavelski and Colin Miller also scored for the Stars, who have won three straight. Scott Wedgewood stopped 28 shots while making his third consecutive start in place of the injured Jake Oettinger.

Leon Draisaitl and Darnell Nurse had goals for the Oilers, who have lost two straight after a five-game winning streak. Campbell had 30 saves.

Dallas got on the scoreboard 6:15 into the first period. Campbell made a kick save on a blast by Robertson, but the rebound came out to Roope Hintz, who made a perfect pass to Pavelski at the side of the net for a tap-in to get his sixth of the season and extend his point streak to four games.

Edmonton had a few opportunities to pull even, but Wedgewood made a save on a 2-on-1 opportunity from Kailer Yamamoto and Derek Ryan then hit a post on a breakaway.

Not long after Robertson was stopped right on the doorstep in the second period, Dallas doubled its lead at 6:46 as Campbell couldn't squeeze his glove on a long slap shot by Miller -- his first of goal the season.

Ryan Nugent-Hopkins found Draisaitl in his usual position at the bottom of the face-off circle and he fired his seventh of the season past Wedgewood midway through the middle period to make it 2-1.

Dallas pulled away late in the second, starting with a goal from Robertson that hit the post and then caromed off Campbell's back and into the net -- his eighth of the year -- with 5:12 remaining.

Just 39 seconds later, the Stars made it 4-1 on the power play as Robertson tucked his own rebound behind the Oilers netminder and Benn poked it in.

Edmonton got a goal back 3:41 into the third period as Jesse Puljujarvi feathered a pass ahead to a hard-charging Nurse, who beat Wedgewood for his third of the season and 200th NHL point.

However, Dallas responded just 20 seconds later on another power play as the puck deflected off a defender to Benn at the side of the net and he recorded his second of the game.

Benn completed his hat trick with 7:27 remaining, opting to shoot on a 2-on-1 and picking the top corner behind Campbell for his fourth.

Robertson extended his point streak to seven straight games, and became the fifth player in franchise history with a multipoint streak of at least four games. He joined Brad Richardson (2010-11) and teammates Hintz (2021-22), Pavelski (2011-12) and Benn (2011-12), who all also had four-game streaks.

Oilers star Connor McDavid is one away from his 500th career NHL game.

Dallas: At Winnipeg on Tuesday night to finish a three-game trip.

Edmonton: At Washington on Monday night to open a four-game trip.