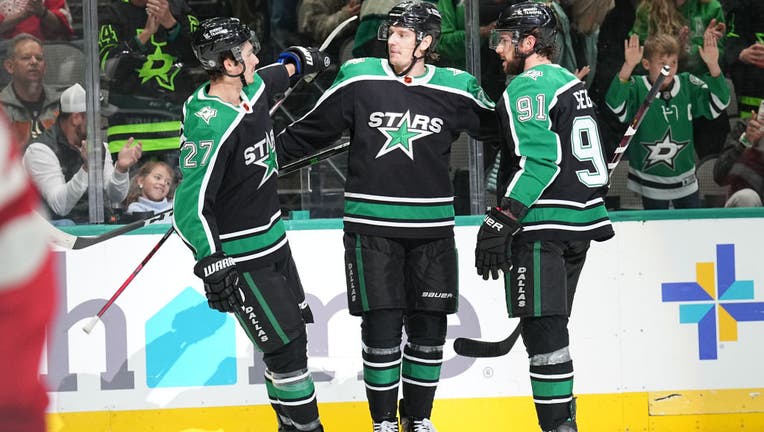 DALLAS, TX - DECEMBER 10: Denis Gurianov #34, Mason Marchment #27 and Tyler Seguin #91 of the Dallas Stars celebrate a goal against XX at the American Airlines Center on December 10, 2022 in Dallas, Texas. (Photo by Glenn James/NHLI via Getty Images)

David Perron scored a goal for Detroit in his 1,000th career NHL game.

The Stars won late in overtime for the second time in less than 48 hours. They had been been 0-5 in games past regulation before a 4-3 win over Ottawa on Thursday night, when Tyler Seguin scored with 29 seconds left in OT.

Lundkvist got his third goal of the season for the game winner with a shot past Ville Husso, the Detroit goaltender who had 30 saves. It was Mason Marchment's second assist of the game.

Jake Oettinger got his 11th win of the season by stopping 24 shots.

Both captains had go-ahead goals in the game. Dylan Larkin skated off the Red Wings bench to score for a 1-0 lead in the first period, and Jamie Benn had a power-play goal in the second that put Dallas up 2-1.

Perron's ninth goal this season, and 278th of his career, tied the game at 2-2 with a minute left in the second period. He was able to use his stick to tip in Ben Chiarot's 56-foot shot after a faceoff even while engaged with a defender at the edge of the net.

Larkin scored on a slap shot from the top of the left circle. He was coming off the bench when he took a pass from Austin Czarnik, who started the Detroit rush after picking off the puck at the other end to stop an odd-man chance for the Stars.

Dallas had just killed off a penalty when Denis Gurianov scored on a nifty pass from Marchment late in the first to even the score.

Marchment went down in the corner with about five minutes left in the second after taking a stick to the face from Jake Walman, who got a double-minor penalty. The Stars capitalized on Benn's 11th goal from between the circles after getting a pass from Jason Robertson.

Perron became the fourth player this season and 374th overall to reach 1,000 career games. The 34-year-old Perron is in his 16th NHL season, his first with Detroit. The Quebec-born forward won a Stanley Cup title with St. Louis in 2019 and has 686 career points (278 goals, 408 assists).

NOTES: Detroit earned points in three of its games during a four-game trip (2-1-1). ... Robertson's 19th assist came after he went without a point the previous two games to end his Dallas Stars' record 18-game points streak. ... Benn has 27 points (11 goals, 16 assists) while playing all 28 games this season.

Detroit is home against Carolina on Tuesday night.

Dallas is at Pittsburgh on Monday night for the first of five consecutive road games in a span of eight days.