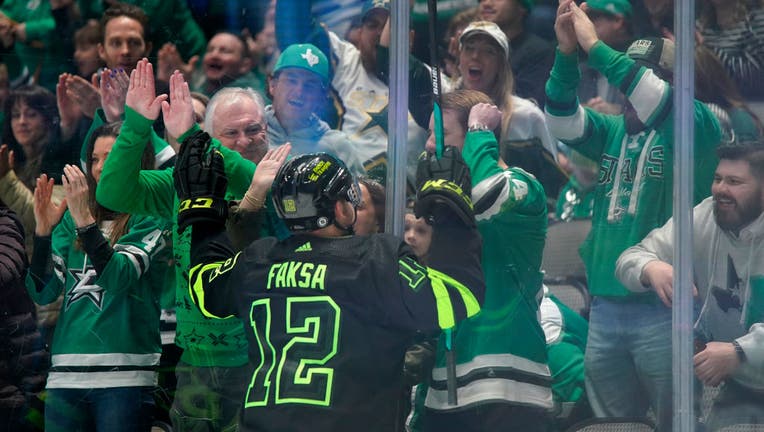 DALLAS, TEXAS - JANUARY 21: Radek Faksa #12 of the Dallas Stars celebrates in front of fans after scoring a goal during the first period against the Arizona Coyotes at American Airlines Center on January 21, 2023 in Dallas, Texas. (Photo by Sam Hodde

DALLAS (AP) - Radek Faksa had a rare two-goal game while the Western Conference-leading Dallas Stars got yet another 4-0 win.

Faksa had his first two-goal game in more than three years, captain Jamie Benn and rookie Wyatt Johnston each scored and the Stars beat the hapless Arizona Coyotes on Saturday night — by the same 4-0 score the Stars won at playoff contenders Vegas and Los Angeles in their just-completed trip out West.

"The start was the biggest factor in the game," said Faksa, who has three goals in three games after none the previous 25 games. "Sometimes it just comes to you. But lots of games, I try to pound the net more, read the rebound."

Jake Oettinger had 33 saves in his fourth shutout this season, his second this week coming two nights after Scott Wedgewood had one against the Kings. Oettinger had a sprawling stop midway through the second period, rejecting the puck with his fully extended right skate on Michael Carcone’s breakaway shot soon after Arizona failed to convert on two power-play attempts.

"The guys played to the last minute," Oettinger said. "We’re up 4-0 and guys are blocking shots and doing things the right way, just finish it for us. So they know it means a lot to us."

Arizona lost for the 10th time in 11 games. That stretch, in which the only win was in a shootout against Detroit on Tuesday night, began New Year’s Eve in a loss at Tampa Bay. It was the Coyotes' second consecutive shutout loss, and third this season — all this month.

The earlier shutout victories for the Stars sandwiched a 5-3 loss at struggling San Jose in which they blew a 3-0 lead. That three-game, four-night trip came after Dallas lost at home to Calgary last weekend following back-to-back games in New York.

"We were a different team energy-wise than we were last time," Stars coach Pete DeBoer said. "We got burned in the Calgary game, and I think we’ve got a smart team and they knew we had to have a good start tonight. I think that was the the emphasis, and we did that."

Faksa opened the scoring when he knocked in the rebound of Denis Gurianov's shot only 2 1/2 minutes into the game, and

"We knew how they would attack us, but they had success," Arizona coach André Tourigny said. "Took a little bit of time for us to get our legs under us ... After the first 10 minutes, it was too little too late."

NOTES: Arizona goalie Connor Ingram faced 39 shots. ... Dallas played the first of eight consecutive home games, half of those coming in a seven-day span before getting the week off leading to the NHL All-Star game on Feb. 4. ... Seattle’s Matty Beniers (17) is the only NHL rookie with more goals than the 19-year-old Johnston. ... Robertson's team-leading 33rd assist for this season was the 100th of his career. ... Benn has points in five consecutive games (three goals, two assists). ... Stars center Roope Hintz took part in the morning skate, but missed his seventh game in a row since sustaining an upper-body injury Jan. 8.