DALLAS - It was a special night at the American Airlines Center as the Dallas Mavericks retired Dirk Nowitzki's #41 jersey.

The Mavs honored Nowitzki Wednesday night nearly three years after he announced his retirement on the court after the final home game of the 2018-19 season.

The 43-year-old Nowitzki played a record 21 seasons with the same franchise, beating the late Kobe Bryant's previous mark of 20 with the Los Angeles Lakers.

Nowitzki was on hand for the ceremony along with his wife and their three kids.

NBA Commissioner Adam Silver was one of the honored guests. Several of Nowitzki’s teammates from the 2011 title team were also on hand.

Nowitzki’s #41 banner will be raised to the rafters next to the other retired jerseys of Brad Davis, Derek Harper and Rolando Blackman.

Nowitzki was emotional as he watched a video of his career highlights. 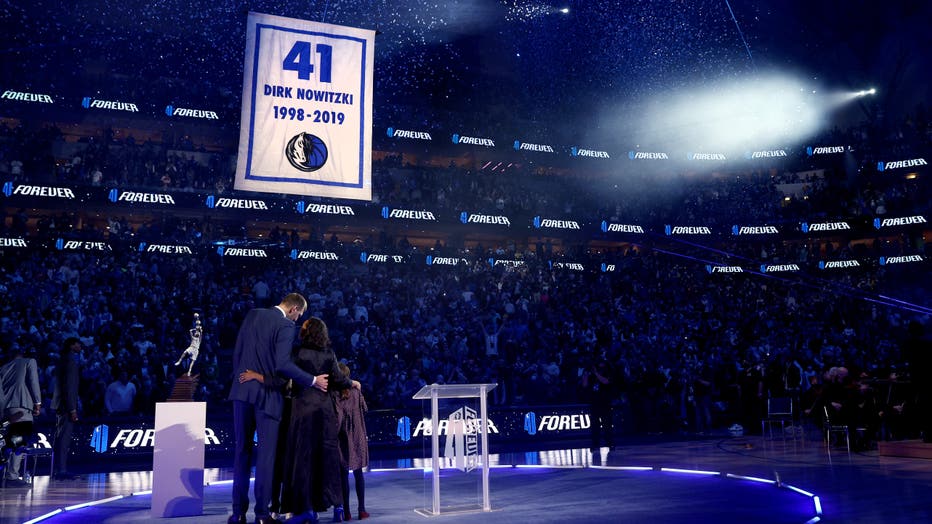 Former Dallas Mavericks player Dirk Nowitzki looks on with his wife, Jessica Olsson, as the Dallas Mavericks raise a banner while retiring his No. 41 jersey at American Airlines Center on January 05, 2022 in Dallas, Texas. (Photo by Tom Pennington/Ge

Obviously, no player has had the impact on this franchise that Nowitzki had. That was evident Wednesday night given some of the star power in the building.

About 20,000 Mavs fans stuck around after the Mavs-Warriors game to honor him. They beat Golden State 99-82.

Nowitzki is sixth on the career scoring list with 31,560 points, and the 14-time All-Star also leads the Mavericks in career 3s, rebounds and blocks. He was the 2007 NBA MVP and 2011 Finals MVP.