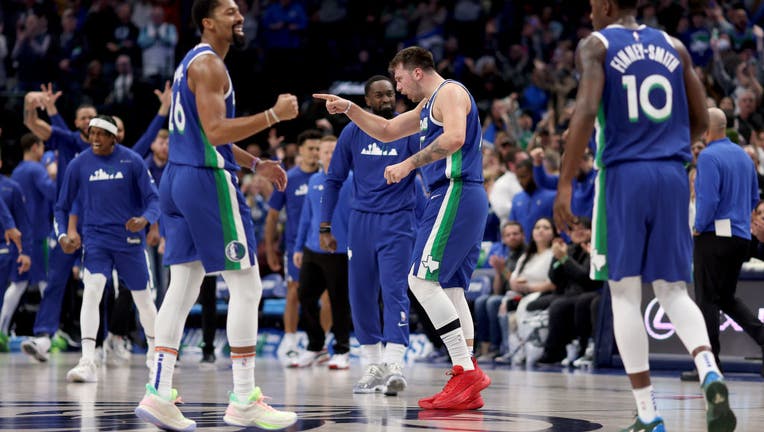 DALLAS (AP) - Luka Doncic had 42 points, 13 rebounds and 10 assists for his third triple-double of the season, and the Dallas Mavericks beat the Portland Trail Blazers 117-112 on Saturday night.

Spencer Dinwiddie scored 20 points, capped by three 3-pointers in the final 2½ minutes. The first of those tied it at 106 with 2:35 to play. His next, with 1:52 to go, put the Mavericks ahead for good.

Jerami Grant scored a season-high 37 points for the Trail Blazers, who finished a six-game road trip 4-2 and remain one game behind first-place Utah in the Western Conference. Damian Lillard had 29 points and 12 assists, and Anfernee Simons added 24 points.

Doncic scored 30 or more points for the 10th time in 12 games after being held in the 20s in Dallas’ previous two games, losses at Orlando and Washington.

"He had 42, a triple-double — I mean, it’s just a little walk in the park," Mavericks coach Jason Kidd said of his 23-year-old superstar.

Dinwiddie was 6 of 8 from behind the arc after having his two highest-scoring games of the season with 29 at Orlando and 33 at Washington.

"They trapped Luka. He makes the right read, the right pass," Dinwiddie said of his late flurry. "We then were just swing, swinging and it just found me."

Portland played its third consecutive game without Jusuf Nurkic, seventh in the NBA in rebounding, who is sidelined by a right hip adductor.

The Blazers ran off the game’s first seven points thanks to grabbing the first four rebounds and led 23-20 with 4:23 left in the opening period. Wood, who plays the most minutes at center but doesn’t start, then entered for the first time and scored 10 points as the Mavericks went on a 15-2 run to lead 35-25 at the quarter.

Dallas led 49-33 midway through the second quarter following two 3-pointers by Tim Hardaway Jr. and another by Dinwiddie. The Blazers cut it to 59-57 at the half.

ALL IN YOUR HEAD

Blazers coach Chauncey Billups didn’t fear his players would lack the proper focus going into the finale of the long road trip.

"It’s still a basketball game," Billups said. "Yeah, we’re excited to get home, but no matter whether you win the game or lose the game, we’ll get home at the same time tonight."

WORKING HIS WAY BACK

Hardaway was a team-high plus-23 with 16 points. He has played in all but one game this season after missing the second half of last season with a fractured foot.

"I think I’m just so amped to be back out there," Hardaway said. "My guys are feeding me the rock. They tell me to shoot the ball when I’m open. No hesitation."

Blazers: Justise Winslow, who started four of the previous five games, was out with a sprained ankle. … Shaedon Sharpe returned to the lineup after missing one game with a finger fracture and scored five points in 19 minutes.

Mavericks: They shot 50.6 percent from the floor (41 of 81) and outscored the Blazers 48-36 in points in the paint. … Dwight Powell and Reggie Bullock each started and finished with two points.

Blazers: Open a three-game homestand on Tuesday vs. San Antonio.

Mavericks: Host the Los Angeles Clippers on Tuesday in the second of five consecutive home games.