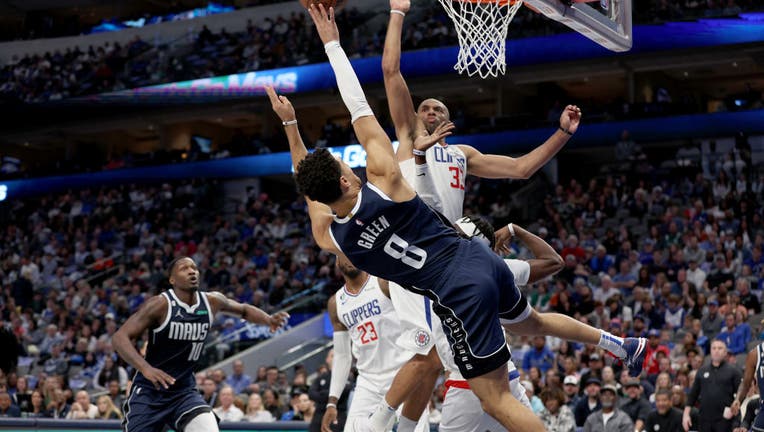 DALLAS, TEXAS - JANUARY 22: Josh Green #8 of the Dallas Mavericks drives to the basket against Nicolas Batum #33 of the LA Clippers in the second quarter at American Airlines Center on January 22, 2023 in Dallas, Texas. NOTE TO USER: User expressly a

DALLAS (AP) - Kawhi Leonard scored a game-high 30 points, Paul George had 21 and Norman Powell added 19 off the bench to give the Los Angeles Clippers a 112-98 win over the Dallas Mavericks on Sunday.

With the score tied at 79 going into the fourth quarter, the Clippers scored the first six points and pulled away to build their largest lead at 110-95 with two minutes to play. Powell scored 11 in the quarter, including nine in the first part of it.

The Clippers won consecutive games for the first time since Dec. 26-27, while the Mavericks have lost four of their last five games and seven of 10.

The Mavericks led by as many as 10 points during the first half and were up 54-49.

Doncic received his 10th technical foul of the season, with one rescinded, late in the first quarter. After Nicolas Batum blocked a Doncic shot inside, Doncic expressed his dissatisfaction to official Ashley Moyer-Gleich on his way back down the court.

Tipoff time was moved to 1:30 p.m. PST from 6:30 to avoid a conflict with the Dallas Cowboys' playoff game at San Francisco, which was scheduled to kick off at 5:30 p.m. PST.

Clippers: Leonard and George played in the same game for the 18th time in 49 games this season, the third time in Los Angeles' last nine starting lineups.

Mavericks: Doncic, fourth in the NBA averaging 8.8 assists per game going into Sunday, had four - and none in the first half. … Dallas shot 15 for 26 from the free-throw line.

Clippers: Are the designated visiting team against the Los Angeles Lakers at Crypto.com Arena on Tuesday.

Mavericks: Finish a four-game homestand Tuesday against the Washington Wizards. It's likely to be the first Dallas appearance for Kristaps Porzingis since he was traded to the Wizards almost a year ago.