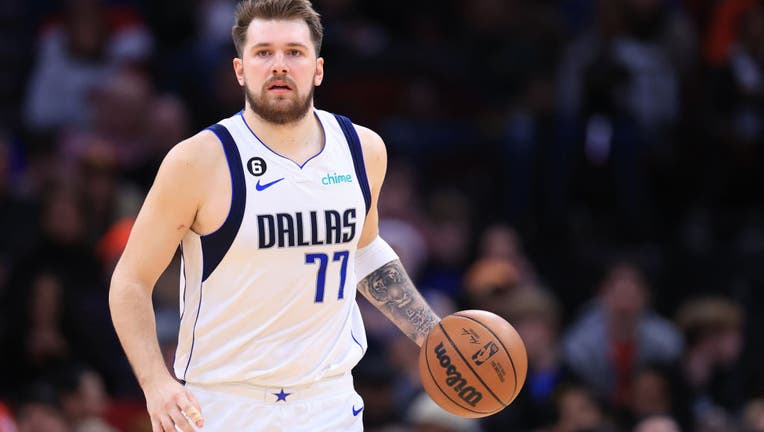 HOUSTON, TEXAS - DECEMBER 23: Luka Doncic #77 of the Dallas Mavericks controls the ball during the second half against the Houston Rockets at Toyota Center on December 23, 2022 in Houston, Texas. NOTE TO USER: User expressly acknowledges and agrees t

HOUSTON (AP) - Luka Doncic scored a season-high 50 points, including 17 in the fourth quarter, and the Dallas Mavericks held on to beat the Houston Rockets 112-106 on Friday night.

Spencer Dinwiddie and Davis Bertans each scored 11 points for Dallas, which shot 45% and made 16 of 44 3s.

After Bertans hit a 3 to up the lead to four, Smith cut the lead to two with a jumper with a 1 ½ minutes remaining. The two teams traded turnovers and missed shots before Doncic nailed a 3-pointer with 18 seconds left to give the Mavs a five-point lead.

Houston erased a 16-point, second-quarter deficit, outscoring the Mavs 33-15 over a nine-minute span of the second and third quarters to take a 69-67 lead on a 3-pointer by Smith with 6:15 remaining in the third.

Mavericks: Dorian Finney-Smith missed his second straight game with a right adductor strain. … Kemba Walker was out of the lineup Friday night due to left knee injury recovery. … Reggie Bullock left the game in the third quarter with a neck strain.

Rockets: Garrison Mathews (illness) returned to the lineup on Friday after missing the last three games. He was scoreless in 12 minutes. … Jae’Sean Tate (ankle) could return soon, coach Stephen Silas said. "I don’t have a timetable, days or whatever, but it looks like it’s getting closer to days than weeks," Silas said. … Eric Gordon was out of the lineup Friday with a bruised left thumb.

Mavericks: Host the Lakers on Sunday to begin a three-game homestand.

Rockets: At Chicago on Monday to start a three-game road trip.