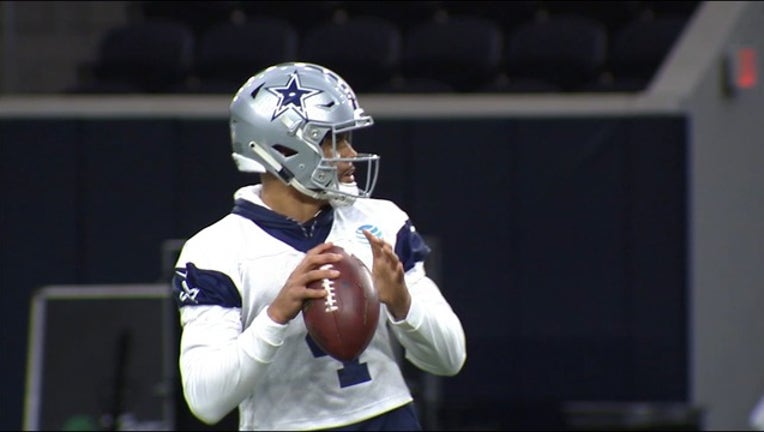 ARLINGTON, Texas (AP) - Russell Wilson won a wild-card game with Seattle as a rookie, a Super Bowl in his second season and another NFC championship the third time around.

The best Dak Prescott can hope for with the Dallas Cowboys is to join Wilson on that list of title winners in his third year, a quest that will start with the first playoff meeting of quarterbacks with quite a bit in common.

Both were mid-round draft picks who became instant NFL success stories. The difference is that Prescott lost his first playoff game after guiding the Cowboys to the top seed in the NFC two years ago, then had to wait two years for his second chance. It comes in a home wild-card game Saturday night.

"When you say success of a quarterback or a quarterback's success depending on what they do in the playoffs, I think that's where the checks are written and they make their money," Prescott said. "Our job is to win no matter what happens, no matter how you played individually. At the end of the day, it's to get the job done."

When Wilson finally missed the playoffs in his sixth season last year, the Seahawks were eliminated on the final weekend - after they bounced Prescott and the Cowboys from contention with a road win in Week 16.

Seattle was 0-2 this year when the season turned on a 24-13 win over the visiting Cowboys (10-6), with the Seahawks following a familiar formula from their Super Bowl days: an efficient Wilson, strong running game and playmaking defense.

The Seahawks (10-6) kept it up despite overhauling the roster, mostly notably dismantling key pieces of the "Legion of Boom" defense. An important exception has been linebacker Bobby Wagner, who was just selected an All-Pro for the fourth time in five seasons.

Wilson was a third-round pick out of Wisconsin in 2012 and won the job in his first training camp. Prescott was drafted in the fourth round out of Mississippi State four years later and became the starter after preseason injuries to Tony Romo and backup Kellen Moore.

In his first three years, Wilson won more games than any other NFL quarterback with 36. Prescott just finished tied for fifth on that list with 32. Two quarterbacks have an NFL-leading 24 games with at least a 100 passer rating in their first three seasons: Wilson and Prescott.

Now it's time for their third - and most meaningful - meeting, with Prescott looking to beat Wilson for the first time.

"Dak had a phenomenal year to get started and get rolling and has just been solid since," Seahawks coach Pete Carroll said. "I think it's the dynamics of the mobility that when you add that together, and of course they can both throw the ball way down the field. You've got the same kind of problems."

Both teams figure to try to control the pace with their running games. Ezekiel Elliott just won the NFL rushing title for the second time in his three seasons, and Chris Carson heads a group of Seattle backs that led the NFL in rushing. The Cowboys were 10th, fueled by Elliott, and have had a top-10 defense most of the season led by pass rusher DeMarcus Lawrence and young playmaking linebackers Jaylon Smith and Leighton Vander Esch. Dallas was fifth against the run.

"We're feeling great," Elliott said. "I believe we have the best defense in football and a pretty good offense, a lot of weapons. I think we have the right recipe to make some noise."

Seattle has won six straight wild-card games, a streak that started when Romo, a first-year starter and still the holder, flubbed the snap on a potential go-ahead field goal in the final two minutes of the Seahawks' 21-20 home win during the 2006 season. Oddly enough during this streak, Seattle has lost every time in the divisional round.

With left guard Xavier Su'a-Filo listed as doubtful because of an ankle injury, the Cowboys are likely to have this season's original starting offensive line before Su'a-Filo replaced injured rookie Connor Williams and kept the job.

The starters are left tackle Tyron Smith, Williams, center Joe Looney, All-Pro right guard Zack Martin and right tackle La'el Collins. Looney has filled in all year for four-time Pro Bowler Travis Frederick, who was diagnosed with a nerve disorder during the preseason.

The Seahawks settled their offensive line in the first Dallas meeting with their best rushing game to that point. A key addition was right guard D.J. Fluker, who sat out Week 17 to nurse a nagging hamstring injury but will play. Left guard J.R. Sweezy is questionable with a sprained foot.

Both teams have had issues protecting their mobile quarterbacks. Prescott (56 sacks) and Wilson (51) were among the four QBs dropped at least 50 times this season.