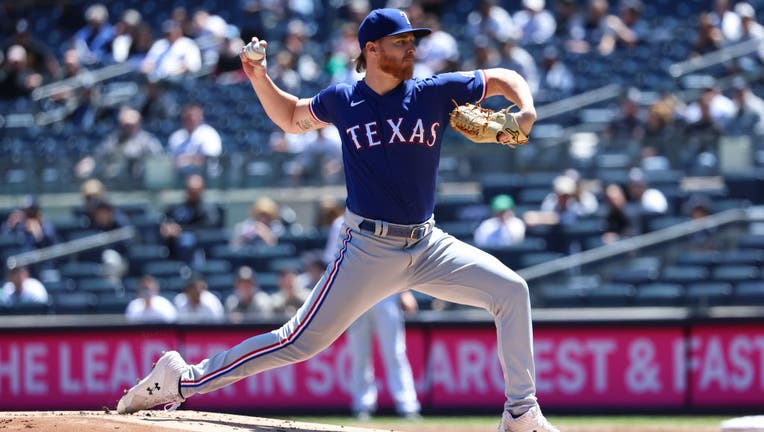 NEW YORK, NEW YORK - MAY 09: Jon Gray #22 of the Texas Rangers throws a pitch during the first inning of the game against the New York Yankees at Yankee Stadium on May 09, 2022 in the Bronx borough of New York City. (Photo by Dustin Satloff/Getty Ima

NEW YORK - Nestor Cortes may be the least-heralded top starting pitcher in the major leagues.

The New York Yankees left-hander was five outs from a no-hitter when he threw his 103rd pitch, and No. 9 hitter Eli White looped a single into short center field. The 27-year-old Cortes, a regular starter in the major leagues since only last July, rocked back twice slightly and grinned with disappointment and satisfaction.

"When the emotions and the adrenaline is rushing, everything feels great," he said. "But now I feel like I got hit by a truck."

Cortes, Clay Holmes and Aroldis Chapman combined on a two-hitter, Anthony Rizzo doubled in a run in the eighth and the Yankees beat the Texas Rangers 1-0 on Monday for their sixth straight series win.

A 36th-round draft pick by the Yankees in 2013, Cortes was taken by Baltimore in the 2017 winter meeting draft, made his debut at the start of the following season and was returned to the Yankees that April. He spent the rest of the year in the minors, shuttled back and forth in 2019, then was dealt to Seattle. He was released after a 15.26 ERA in five games with the Mariners in 2020 and re-signed by the Yankees.

"The three years, ’18, ’19 and 20 were pretty rough on me," Cortes said. "I’ve been playing baseball since I was 4. I feel like that’s the only thing I know how to do. I came out of high school; I don’t have anything to fall back on, so I was going to ride this as long I could."

Cortes focused on fastballs and cutters, improved his conditioning, boosted his average fastball velocity by 2 mph and joined the Yankees rotation at midseason.

"The game’s littered with people that weren’t always the high pick or the top prospect," Yankees manager Aaron Boone said. "He’s persevered. He’s experienced everything. He’s had to fight for everything."

At 90.4 mph, Cortes’ fastball velocity ranks just 134th among 158 pitchers who had thrown 250 or more pitches entering the week.

"It seems to jump on guys, regardless of the velocity," said Yankees teammate Gerrit Cole, fourth in the majors at 97.6 mph.

Boone cautioned: "Don’t get enamored with the number. There’s guys throwing 96, 97 that are getting hit, that it’s not a good fastball."

Making his 22nd big league start and sixth this season, Cortes pitched a big league career-high 7 1/3 innings, walked four and struck out 11, one shy of his high.

"He worked the bottom of the zone really well," said Rangers leadoff hitter Marcus Semien, who went 0 for 3 against Cortes with a pair of strikeouts. "You have to honor that fastball at the bottom, and then he throws a cutter right under it, it’s a recipe for success."

"I think the first one of the game, to Semien, it looked like just disappearing over there," Boone said. "It looked like a Steve Carlton slider."

Cortes twice pitched hitless ball until one out in the eighth for Triple-A Scranton/Wilkes-Barre, only to give up singles to Lehigh Valley’s Andrew Knapp on Sept. 6, 2018, and Syracuse’s René Rivera on May 4, 2019.

Boone was going to let Cortes go for a no-hitter as long as he didn’t get past 105-110 pitches, even after Cortes walked a pair of batters in the seventh. White fouled off a pair of 1-2 pitches, then singled to center.

Holmes (4-0) relieved and got Semien to ground into a double play. Aaron Judge singled in the eighth off Brett Martin (0-3) and Rizzo, in a 2-for-30 slide, lofted a curveball to the opposite-field gap in left-center, with White shifted from center slightly to right.

Chapman allowed a two-out single to Jonah Heim in the ninth and, with pinch-runner Brad Miller on second, retired Nick Solak on a flyout to finish the two-hitter and remain perfect in seven save chances.

New York has won 13 of its past 15 games, taking two of three in the series despite scoring just five runs.

Jon Gray came out because of left knee soreness after allowing two hits in 4 1/3 innings He was sidelined from April 9-18 with a blister on the middle finger of his pitching hand and from April 20 to May 3 with a sprained left knee.

Texas lost for just the second time in its past seven games.

Josh Donaldson in the sixth and DJ LeMahieu in the eighth both failed to run hard on groundouts.

"Donaldson probably took his eye off it for a second." Boone said. "Now and then, you’ve got to say something. I’ve not said something yet."

Rangers: C Mitch Garver was out of the lineup because he was banged up, manager Chris Woodward said.

Yankees: RHP Domingo Germán, on the 60-day IL with right shoulder impingement, has thrown bullpen sessions but not faced batters.

Rangers: LHP Martín Pérez (0-2) is slated to be on the mound for Tuesday’s opener of a three-game series at Kansas City, which starts RHP Brad Keller (1-2).