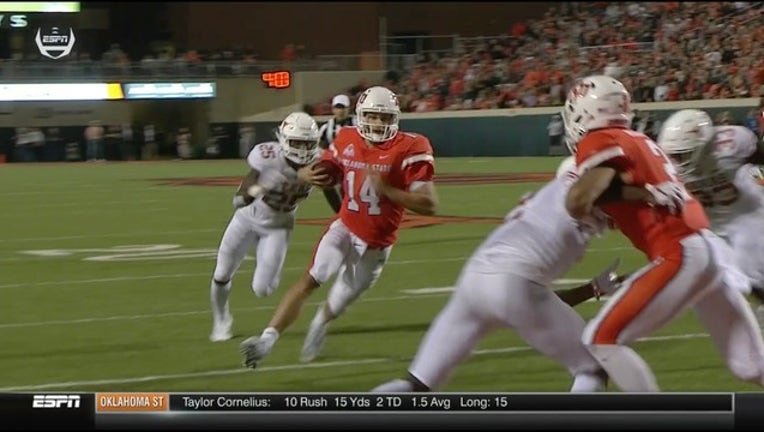 Tylan Wallace had 10 receptions for 222 yards and two touchdowns. The Cowboys snapped a two-game losing streak.

For Texas (6-2, 4-1), Sam Ehlinger returned from a shoulder injury suffered in the previous game. After struggling a bit in the first half, Ehlinger completed 17 of 27 passes for 175 yards and two touchdowns in the second half.

Tre Watson's 1-yard touchdown run with 1:46 remaining pulled Texas to 38-35, but Dillon Stoner recovered the ensuing onsides kick for Oklahoma State. The Cowboys were then able to run out the clock after Cornelius gained a first down on third-and-4 with an 8-yard rush.

Texas: After a lot of speculation all week about whether Ehlinger would play coming off a shoulder injury to his throwing arm in Texas' last game, a 23-17 win over Baylor on Oct. 13, the sophomore quarterback did start, but struggled early. He completed just 2 of his first 8 passes for 29 yards through the first quarter-plus of the game, missing open receivers several times, and was just 5 of 15 for 108 yards in the first half, as Texas dug itself a 31-14 hole by halftime. Ehlinger was much better in the second half, sparking the Longhorn comeback attempt.

Oklahoma State: The Cowboys once again got off to a strong start (they led at some point early in each of their three losses this season) and demonstrated some uncharacteristic aggressiveness on offense. Two of Cornelius' touchdown passes, of 17 and 36 yards, came on 4th-and-1 situations, and another time on 4th-and-1, a fake punt threat resulted in a Texas offside penalty and a first down. While the Cowboys again had trouble offensively in the second half, scoring fewer than 10 points after the break for the fourth time this year, they were able to pull it out in the end. Two missed field goals by Matt Ammendola (from makeable distances of 41 and 38 yards) also hurt.

Texas: The Longhorns return home to take on No. 13 West Virginia in a game that could wind up being a preview of the Big 12 Championship Game.

Oklahoma State: The Cowboys go on the road to face Baylor, which has lost two straight.