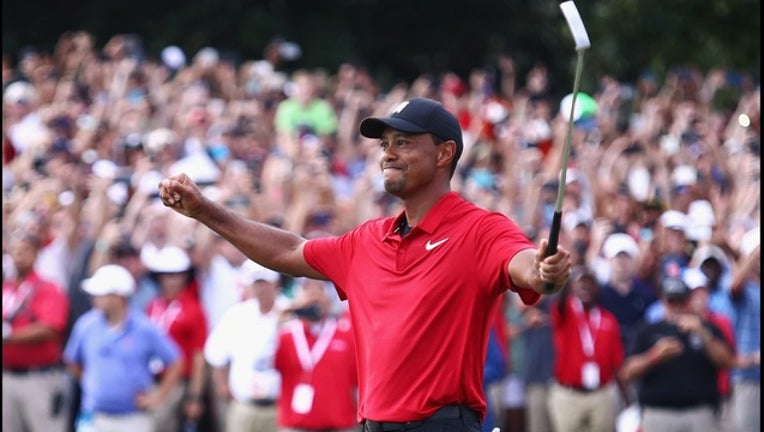 ATLANTA (AP) - They had waited more than five years for this moment.

No way were those frail little ropes, strung up on flimsy poles, going to hold them back.

No way were they listening to those red-shirted marshals, a bit of terror in their eyes as they pleaded futilely for everyone to come to their senses.

They had to feel it, touch it, see it with their own eyes.

Maybe that was the only way to persuade themselves that this most remarkable of comebacks had actually happened.

The staid ol' Tour Championship became a boisterous street party late Sunday afternoon, the fans storming down the middle of the 18th fairway like a bunch of crazed college kids laying siege to a football field after a last-second victory.

"Tiger! Tiger! Tiger!" they chanted over and over, looking very much like they may storm the Tudor-style clubhouse, the roar carrying all the way to Peachtree.

It was thrilling, exhilarating, even a bit frightening for those caught in the middle of the mob.

Then again, it was not an unexpected reaction given what Woods has meant to the game of golf - to the entire sporting world, really.

"From one goat (greatest of all time) to another I can only imagine what @TigerWoods is feeling today," tweeted Michael Phelps, the winningest athlete in Olympic history. "Pumped to be watching this today!! Have fun out there today my man!!!"

Despite an influx of talented young players in recent years, golf just hasn't been the same since Woods went away, his brilliant career derailed by debilitating injuries and personal demons.

As NBC analyst Roger Maltbie put it, "He doesn't just move the needle, he is the needle."

He was more concerned about his quality of life.

On April 19, 2017, he underwent surgery for the fourth time, this time to fuse his lower back. About six weeks later, he was arrested on suspicion of DUI after being found asleep behind the wheel of his car with the motor running.

Woods blamed it on a bad combination of pain medications. Everyone figured he's gotten hooked on drugs as a way of coping with a body that never stopped hurting. The idea of ever playing competitive golf again - much less winning - seemed downright ludicrous.

Then, miraculously, the dark cloud lifted.

Woods got himself cleaned up. The pain went away. Just four months after reporting he couldn't hit the ball more than 60 yards, Woods rejoined the PGA Tour and made the cut in his first event at Torrey Pines.

By the time the summer rolled around, he was in the mix at the major championships.

He earned a spot on the U.S. Ryder Cup team.

He played his way into the finale of the FedEx Cup playoff.

Finally, on a blistering fall day in Atlanta, he made it official.

The comeback was complete.

Woods wasn't fully aware of all the commotion going on behind him as he strolled down the 18th fairway, chatting and smiling with playing partner Rory McIlroy in the final group.

When he got up to the green, Woods could finally survey the remarkable scene. It reminded him a bit of Jack Nicklaus winning the U.S. Open at Baltusrol in 1980, the crowds invading the course as the Golden Bear wrapped up a victory that defied those skeptics who thought he was all washed up at age 40.

"Jack Is Back," the scoreboard famously proclaimed.

"I just didn't have the tight pants and the hair," Woods quipped. "But it was all good.

There was no message on the East Lake leaderboard.

This time, the most telling moment came after Woods teed off at the 14th hole, which dissects the walk to the tee for No. 17.

His closest challenger, Billy Horschel, was heading that way.

He stopped to let him pass.

It only seemed right.

Tiger Woods is back.

And golf is better for it.

Paul Newberry is a sports columnist for The Associated Press. Write to him at pnewberry@ap.org or at www.twitter.com/pnewberry1963 . His work can be found at https://apnews.com/search/paul%20newberry