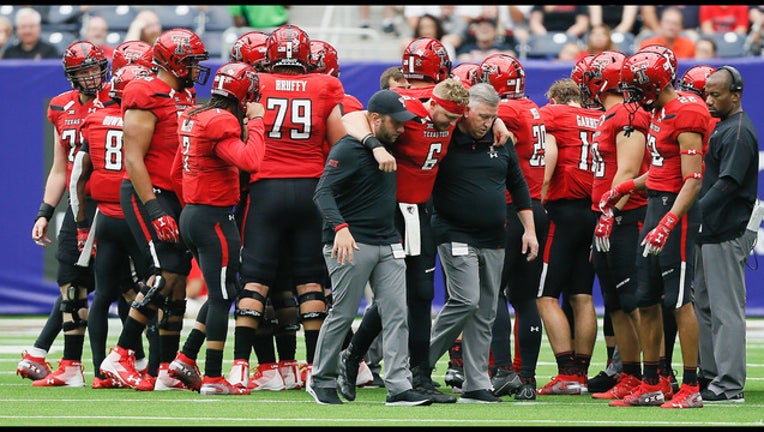 McLane Carter #6 of the Texas Tech Red Raiders is helped off the field by medical staff after sustaining a leg injury in the first quarter Mississippi Rebels at NRG Stadium on September 1, 2018 in Houston, Texas. (Photo by Bob Levey/Getty Images)

HOUSTON (AP) - Just after Mississippi piled up more than 500 yards in a blowout of Texas Tech on Saturday quarterback Jordan Ta'amu was asked about his group of receivers led by A.J. Brown, DaMarkus Lodge and D.K. Metcalf.

"They're so talented," he said. "They're the best in the nation. I believe that in my heart. I'm grateful they're on my side and I can throw to them."

On Saturday the Rebels showed that they have a pretty good running game, too.

Ta'amu threw for 336 yards and two touchdowns and Scottie Phillips ran for a career-high 204 yards and two more scores to give Mississippi the 47-27 win.

Phillips said having such a talented group of receivers helps him out.

"They spread everything out and it gives me a lot more running room," he said. "We've got a veteran o-line and that makes my job a whole lot easier."

Phillips extended Mississippi's lead to 37-20 when scampered 65 yards for a touchdown with about seven minutes left in the third quarter.

Da'Leon Ward's second touchdown on a 9-yard run got Texas Tech within 10 later in the third, but Ta'amu found Brown for a 34-yard touchdown pass on the second play of the fourth quarter to make it 44-27.

"We go to space and if they want to double-team one we're able to go to the others so I think that's pretty unique," Luke said. "It did work out with a lot of balance and that's good."

Texas Tech freshman Alan Bowman was 29 of 49 for 273 yards and a touchdown after taking over late in the first quarter when starter McLane Carter was injured.

"True freshman, first game, that type of atmosphere, just took a while I think for him to settle in," coach Kliff Kingsbury said. "I was proud of how he protected the football, that's what we asked him to do. Protect the ball. Led some nice drives, a couple we'd like to have back, but I thought overall he handled himself well."

Ta'amu got things going early when he connected with Metcalf for a 58-yard touchdown pass on the second play of the game.

The Red Raiders evened it up when Ward ran 15 yards for a score on their first possession. That touchdown was set up when T.J. Vasher made an Odell Beckham-esque one-handed catch for a 31-yard gain two plays earlier. Vasher grabbed the ball with his right hand as he leapt above the defender and secured it with both hands before crashing to the turf near the sideline.

The Rebels were up 17-7 when Carter was injured when he was tackled by a pair of defenders on a run for no gain. He tried to remain in the game but fell to the ground at the line and was helped off the field and then carted to the locker room. Kingsbury said it was a left ankle injury, but said he didn't have any details on the severity of the injury.

Mississippi's first touchdown from Phillips, a run of 39 yards, came next to make it 24-7 late in the first quarter.

Bowman made a nice throw under heavy pressure for a 14-yard TD pass to Ja'Deion High to cut the lead to 27-17 about two minutes before halftime.

Mississippi: Ta'amu looked great from the start of this one, using a variety of receivers and running the offense with ease. He'll have one more week to fine tune things before the Rebels begin Southeastern Conference play.

Texas Tech: Bowman handled things pretty well after being thrown into action following Carter's injury. But if Carter is out for an extended period of time he'll need to keep developing for the Red Raiders to succeed. Texas Tech's defense will also have to figure out how to limit big plays after the Rebels exploited it for several on Saturday.

Texas Tech's Desmon Smith and Vaughnte Dorsey were both ejected for targeting on Saturday, causing concern for Kingsbury.

"That can't happen," he said. "We need to be more disciplined and find a way to not do that. We're lacking secondary coming in and to lose those guys obviously didn't help the matter. We've got to talk about it, practice and have to be better."

Texas Tech defensive lineman Broderick Washington on giving up 210 yards rushing: "That really disappointed me because what we work on on the defensive line and what we pride ourselves on is stopping the run. Obviously we didn't do it. They came in big chunks though. We just need to minimize the big plays."

Mississippi: The Rebels host Southern Illinois next Saturday before opening conference play on Sept. 15 when they host top-ranked Alabama.

Texas Tech: The Red Raiders host Lamar next Saturday in their home opener before the Houston Cougars visit Lubbock on Sept. 15.