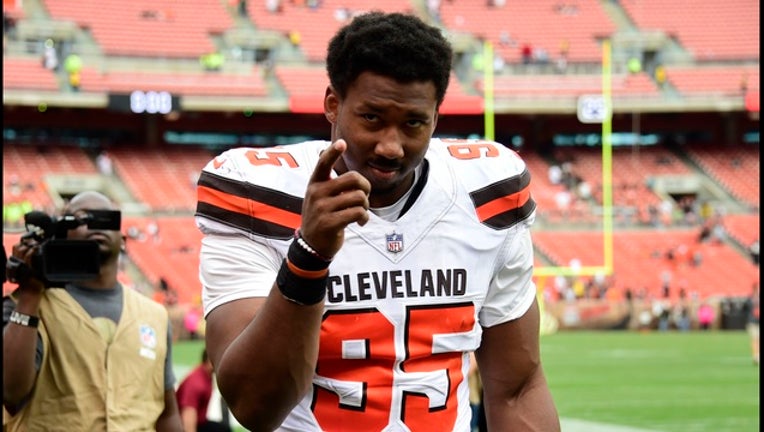 CLEVELAND, OH - OCTOBER 08: Myles Garrett #95 of the Cleveland Browns walks off the field at the end of the game against the New York Jets at FirstEnergy Stadium on October 8, 2017 in Cleveland, Ohio. (Photo by Jason Miller/Getty Images)

The No. 1 overall pick unloaded on officials on Friday, criticizing them for several calls that have gone against Cleveland in recent weeks and swung momentum in their games.

"Do your job just like we need to do our job," Garrett said. "If it's holding, call holding. If it's a false start, false start, whether it's us or them."

Garrett spoke out unafraid of any consequences from the league, which is sensitive about players criticizing its officiating crews.

"If I get fined, so be it," he said. "Something needs to be said. If it keeps on going this way, this route, where it seems like we keep on getting the short stick."

Garrett has issues with a number of calls, but he was particularly peeved about a play in the second quarter of last Sunday's 38-14 loss to the Los Angeles Chargers.

With the Chargers driving, Los Angeles left tackle Russell Okung clearly moved and dropped into pass protection before the ball was snapped. Garrett stopped rushing Okung, and several other players slowed in anticipation of a whistle. But nothing was called, the play continued and Philip Rivers threw a 29-yard touchdown pass.

So what should have been a false start instead became a touchdown.

"It was so obvious," Garrett said. "To my mind, he's moved, nobody else has moved and the ball hasn't moved, so it's kinda textbook. The flag should be up. I don't understand how you don't see it. That's his job is to look down the line and see when people are jumping offside or false starting, but I've got to keep on finishing the play."

And while the score put the Chargers up by 18 in a game they'd win by 24, Garrett said a different outcome on the play could have changed things.

"Momentum matters in the game," he said. "No doubt. And a six-point turnaround, a seven-point turnaround like that where it could've been a sack or maybe a forced fumble if you keep on playing, or just a no play at all, to a touchdown, that's a huge difference. There were a couple missed calls like that, and that's not on Okung, he's just doing his job.

"It's on the ref and to him to have that kind of integrity to call that play when it comes."

Garrett also referenced the Sept. 30 game at Oakland when a strip sack of Derek Carr was nullified by a quick whistle. The Browns scooped the apparent fumble and were running for a TD when the officials ruled Carr was in the grasp.

Garrett said there were other instances, and he just wants there to be fairness.

"If it's holding for them, if they're grabbing us, if they're turning us, if they're trying to pull us out of a gap whether it's a run play or a pass play, it needs to be called," he said. "There's no excuse for us. We need to get their hands off of us and we need to play ball, because we know they're not going to get those kind of calls, but at the end of the day, if they see it, they need to pull the flag out."