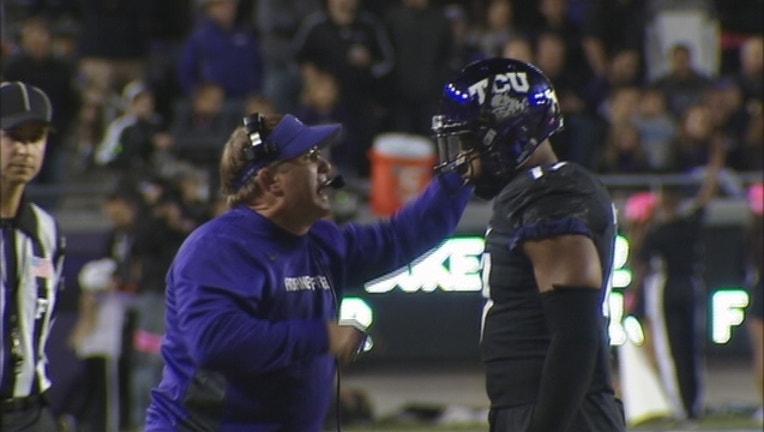 FORT WORTH, Texas (AP) — Trevone Boykin threw for 285 yards and four touchdowns in a little more than a half, Aaron Green ran for two scores and No. 3 TCU beat lower-division Stephen F. Austin 70-7 on Saturday.

The Horned Frogs (2-0) won their 14th straight home opener under Gary Patterson since losing to Northwestern State of the FCS in his Amon Carter Stadium debut as head coach in 2001.

The Lumberjacks (0-2), facing the highest-ranked opponent in school history, dropped to 0-9 against Big 12 teams.

Kolby Listenbee had six catches for 142 yards, including a 60-yard touchdown that was one of five scores in span of about 10 minutes after Stephen F. Austin passed on a chance to get the game's first points and came up short on fourth-and-goal from the TCU 10 in the first quarter.

Boykin threw a 24-yard pass to Josh Doctson the first play after the failed fourth down by the Lumberjacks. Boykin added a 51-yarder on a deep throw to Listenbee to set up Green's first touchdown, from 2 yards to cap a 93-yard drive.

Coming off an uneven performance in 23-17 victory at Minnesota in the opener, Boykin was 18 of 27 with an interception that gave Stephen F. Austin another chance to score late in the second quarter. But the Lumberjacks went for it again on fourth down in field goal range trailing 35-0, and Zach Conque's pass was intercepted by Michael Downing.

Boykin extended his nation-leading streak of consecutive games with a touchdown pass to 17 on the long scoring toss to Listenbee, who caught the ball in stride on a deep crossing pattern and ran untouched to the end zone.

Conque had 11 completions, but for just 9 yards, and was sacked four times before leaving in the third quarter.

A TCU defense missing two starters at linebacker and a pair of key linemen held the Lumberjacks to 167 total yards — 75 of those coming on a touchdown run by Loren Easly early in the fourth quarter that avoided the shutout.

Boykin played one series in the second half, leaving after a 3-yard scoring pass to Emanuel Porter that put TCU up 42-0. Five plays later, Denzel Johnson returned an interception 50 yards for a score against Stephen F. Austin backup Hunter Taylor.

The other scoring passes for Boykin were 6 yards to KaVontae Turpin and 9 yards to Ja'Juan Story, both in the second quarter.

Green carried only five times for 20 yards — all in the first quarter. His last carry was a 7-yarder for a 14-0 lead for the Frogs, who won the only other meeting with the Lumberjacks 67-7 seven years ago when the Big 12 co-champions were in the Mountain West Conference.