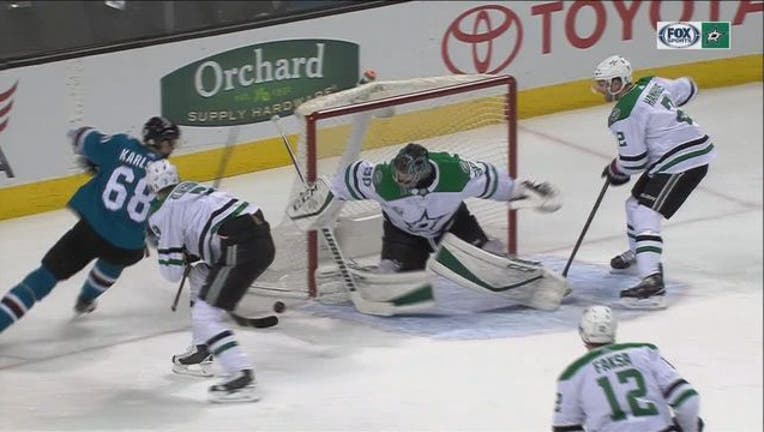 Gemel Smith and Tyler Pitlick scored for Dallas. Ben Bishop was chased after allowing four goals on five shots, and Kari Lehtonen made 22 saves in relief. The Stars had won six of their previous seven games.

The Stars beat the Sharks 6-0 on New Year's Eve and had won three straight against them entering play Sunday.

Pavelski scored 27 seconds into the contest to spark the onslaught. After taking a pass from Timo Meier, Pavelski backhanded the puck into the net. Karlsson made it 2-0 a little more than five minutes later, taking a rebound off the back boards, he was able to sneak it past Bishop.

Boedker scored when his shot was deflected off the stick of Alexander Radulov and past Bishop. Boedker scored again two minutes later with a shot over Bishop's left shoulder, ending Bishop's day with 2:37 remaining in the first period.

Braun found a crease through the defense to make it 5-0 five minutes into the second period.

Smith scored midway through the third period after taking a smart pass from Brett Richie and tapping it into an open net.

Pitlick scored on a rebound in front of the net off a shot from John Klineberg.

NOTES: The Sharks recalled F Danny O'Regan as C Tomas Hertl did not play a second straight game with an injury. ... Stars F Martin Hanzal is traveling with the team on their three-game California road trip but was scratched from Sunday's lineup with "general soreness," coach Ken Hitchcock said. ... Stars C Jason Dickinson was optioned to the Texas Stars (AHL). ... Pavelski has nine points over his last six games. ... Boedker has scored goals in each of his last three games. ... Sharks D Marc-Edouard Vlasic has an assist in each of his past four games.

Stars: At Anaheim on Wednesday night.