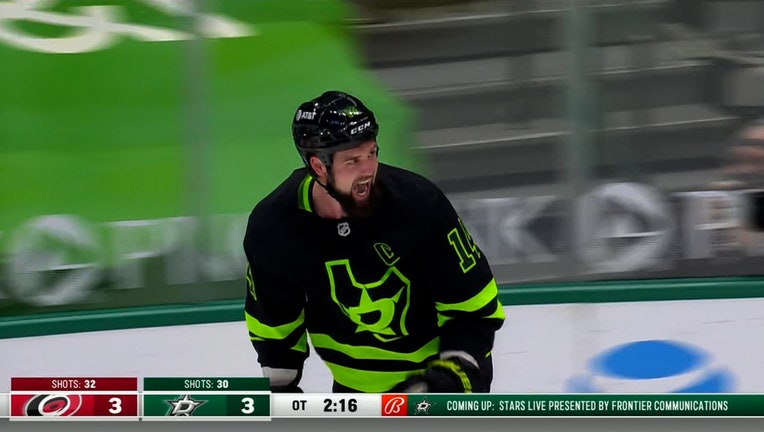 DALLAS - Jamie Benn scored the overtime winner for the second straight game and assisted on Dallas’ three regulation goals as the Stars beat the Carolina Hurricanes 4-3 on Monday night.

Benn scored on a pass from Jason Robertson at 2:44 of overtime after Robertson took the puck from Vincent Trocheck along the boards in the Dallas zone.

Benn scored 32 seconds into overtime Saturday to beat Detroit 2-1. The Stars won their first overtime game of the season on Jan. 26, then dropped six straight before Saturday’s win.

"It's definitely nice when they go in," Benn said. "We all know it was a little bit of a struggle to start there and all year."

Benn had his first four-point game since December 2015.

"That’s one hell of a hockey game he played tonight," Dallas coach Rick Bowness said of Benn. "I think he loves these situations where he can put the team on his back and say, ‘Let’s go.’ "

Joe Pavelski, Jason Dickinson and Denis Gurianov also scored for the Stars, who have earned points in 10 of their last 11 games (8-1-2) and remain two points behind Nashville for the last playoff spot in the Central Division with eight games to play. Jake Oettinger made 29 saves.

Max McCormick, Jaccob Slavin and Jani Hakanpaa scored for the Hurricanes, who lost in overtime for the second straight game but clinched their third straight playoff berth with the point. James Reimer stopped 27 shots in his second appearance since April 1.

"We have eight games to go and we’re in the playoffs? That’s pretty impressive," coach Rod Brind’Amour said. "I know we lost the game in overtime — we lost the talent show part, you don’t want to lose that — but we dug in and got us a point, got us in."

The teams will complete a back-to-back at American Airlines Center on Tuesday in Dallas’ final home game of the season.

Pavelski scored his NHL-high 12th power-play goal at 1:19, banking in a shot off Hakanpaa after Hakanpaa and Dallas’ Jason Robertson collided and Robertson landed on Reimer.

Dickinson scored his first goal since March 18 when a shot from the left point by Esa Lindell caromed off his right boot past Reimer.

McCormick batted in the puck in midair following a backhand pass from behind the net from Morgan Geekie at 13:24 of the second period for his first goal since November 2018. Slavin followed 3:04 later with a wrist shot while defended by Dallas forward Andrew Cogliano, who was playing without a stick.

Gurianov fired a one-timer from the right circle 36 seconds after Slavin’s goal as Dallas regained the lead.

Hakanpaa’s slap shot from the high slot deflected off Dickinson’s skate to tie the score 3-3 at 15:46 of the third period.

TWO IS A FIRST FOR DALLAS

Benn became the first player in the history of the Minnesota-Dallas franchise to score overtime goals in two straight games. The only NHL player to ever do it in three straight games is Cogliano, as a rookie for Edmonton in March 2008.

THIRD IS A FIRST FOR CAROLINA

The Hurricanes have never previously played in three straight playoffs since moving from Hartford in 1997. They also have a two-point lead in trying to claim their first division title since 2006, when they won the Stanley Cup.

"They’re never satisfied, and they never give up," Brind’Amour said. "We’re on a mission here."

Stars center Tyler Seguin, sidelined since having hip surgery in early November, participated in the morning skate but continues on the team’s taxi squad with the hope of returning to the lineup this season. One of Dallas’ top two scorers each season since acquired in July 2013, Seguin was originally scheduled to return in early April.